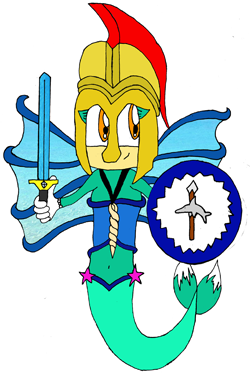 "*in calm and wise voice* Because you have the courage, determination and strenght like no one else, I know except maybe myself. Defeating such force is something my willpower wants to test... *changes to a challenging voice* And besides, I'm itching for some good brawl, so enough of talking! Prepare to fight and perhaps to lose!"
—Caley, when Sonic asks her why would "a girl" wants to battle with her, before their first fight.

Caley is very friendly, fun-loving and easygoing when she is around her friends, but when she is alone or with strangers, she acts tougher and more combative, than she is around the ones she knows better. She loves fighting and proving her strenght, therefore she never refuses a fight. She puts her helmet on, in most of her fights, so her opponents are not going to know, that she is actually a girl, otherwise most of them wouldn’t dare to hurt her or they would try to give her advantage.

She dislikes rules and hates prejudice, which makes her a very tomboyish and confident character, yet once in a while, she likes to pretend childlike innocence and lack of self-discipline. Among the other five girls she is known to be the most outgoing and energetic member, therefore she loves any kind of sport especially water- and extreme sports - and naturally she is the happiest when she is around water. She also likes passing her knowledge and skills to others, which is the reason why she took on teaching swimming lessons to the younger Chaos. Despite she has water wings and she does find them useful she also considers them good for transport and doesn't really flies unless she is out of the water.

She comes from a Kingdom not too far away from Mosswood, known as the Streamtide Realm. She was born as a princess. Not too long after her birth, the king left his home to protect his subjects - as well as his daughter - from a dangerous creature known as King Chrome Squid. Unfortunately he didn't knew that the giant fish wasn't evil - at least as long as other sea creatures leave him sleep for a thousand years. If they do disturb him, however, he goes bersek and destroys not just the one who woke him up, but all his/her relatives. Which is exactly what he did after the king lost the battle - along with his life.

He broke in the castle and killed the queen as well. Baby Caley - who was with her - playfully grabbed a small knife next to her and pointed It towards the monster, so when he was about to attack her, he cut his tentacles instead or hit the wall, what is collapsed. The sound woke everybody in the castle up, and rushed towards the queen's bedroom. When they saw that baby Caley holds a knife with blood on It and her mother is dead, they suggested to close her to her room and don't ever let her out, while again others recommended to teach her everything a Water Warrior should know. Unfortunately for the sake of being the future queen of the kingdom, they choosed the former.

However - like you would expect - the more times they forbid her, the more interesting she found these kind of battles. She still studied a lot, but she secretly practiced her swordplaying techniques as well, because she knew if she is not going to keep this in a secret, she'll gets her punishment sooner or later. She also knew, that female Merfoxes like herself, has the ability to attract other males with their sound and - with her case at least - her beautiful long hair, so when she was eight years old, she decided to hid It to a golden helmet then asked some poorer knight that in return of some money, they teach her everything a warrior has to know. They agreed, and did just that.

Of course, they were curius who is the talented fighter behind the helmet, so they made her promise that she will show her face after the end of the training, which she gave her word to and did just that in that day, however she bought potion with herself what makes the target forget about the one, who created the potion and - since she learned that the King Chrome Squid is the responsible for her parent's death - she decided to kill him.

It was a long battle, but - despite she was young and she injured severly - Caley won. By the time her subjects appeared the battle was over. Seeing they finally realized they cannot force her to be something she have never been, they let her leave the Streamtide Realm.

Retrieved from "https://sonicfanon.fandom.com/wiki/Caley_the_Merfox?oldid=1641508"
Community content is available under CC-BY-SA unless otherwise noted.