"It's not because you're the weakest, it's because I am the strongest."

~ Caleb during his battle with Void. 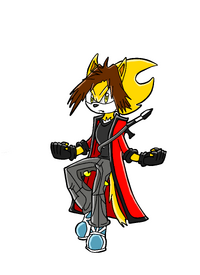 Caleb can be a fun-loving guy, but when it comes to fighting don't cross his path.He cannot be decieved very well, and has an iron will. Caleb is very secretive of his past, and gets agitated if the matter is brought up. He has a stern attitude when dealing with villains, and does not bluff.

Caleb was born to a scientist and his wife. His father tested the effects of his son's supernatural elemental abilties, and in result of this, Caleb has become a strong fighter at a young age.

At age 19, Caleb's town was attacked and destroyed by an evil being known as Sephiroth. His father was killed,his brothers were scattered across Mobius, and  his mother's whereabouts are unkown. After seeing what Sephiroth had done, he rose from the destruction, established a team of heroes who have a sincere hatred for the evil in the world and led them as "Team Destruction". Caleb informed his team of what's called "The Mission". He explained that the experimentation that took place when he was a child unleashed evil as a physical being with wicked powers behond belief. When the team was formed, a friend of Caleb's, Ethan the Porcupine, knew how to work with nanite technology, crafted a mother ship for the team to train, live, and gaurd the planet. To be continued.......

Retrieved from "https://sonicfanon.fandom.com/wiki/Caleb_Hedgewolf?oldid=1474096"
Community content is available under CC-BY-SA unless otherwise noted.