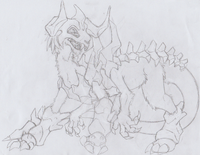 An ancient creature that made its home deep within the Point of No Return, Calamis has only one goal; to prevent the Aphotic Orb from being taken away by anyone.

A hulking creature who stands almost nineteen feet tall on its hind legs, most of Calamis' body is covered by a skeletal-looking armor that seems to be carved from raw Tenebrite, while the rest of its body is covered by shaggy black fur. The top part of its head resembles a carnivore's skull, with a large pair of horns growing from either side of its 'skull' that point forward, as well as smaller horns behind the larger pair. It also has two pairs of eyes showing from the 'eye sockets' of its head; the eyes are golden poppy in color, with pure white pupils that are thinly ringed in black.

It has four pairs of arms, with the forearms of the upper pair being made entirely out of Tenebrite, with crystalline, two-fingered claws; the lower pair ends in more conventional claws, and is also set closer to the bottom of its ribcage, instead of being directly below the upper pair. It has large Tenebrite spikes on its back that run all the way down to the base of its tail and resemble vertebrae, as well as Tenebrite armor on its chest. Its body is elongated, having digitigrade legs with the portion below the ankle being covered in Tenebrite armor, and a long, thick tail that ends in a bladed tip (also carved of Tenebrite).

Nobody knows how or why Calamis ended up where it did; it's most likely that it had been there long before Lady Iluntasun Blackspire founded the Dark Clan of Voidstar within the Fearful Caverns. Most people don't even believe there's any type of animal living within the Point of No Return, much less a gigantic, ancient creature. Calamis bothered nobody; it stayed deep within the treacherous caves, seemingly hibernating, and the only acknowledgment of its presence were rumors spread about by the children of the Dark Clan.

Calamis was finally roused from its slumber thanks to the all-out brawl between Mackenzie, Scarlet, Sephtis, Vendeta, Vendeta Blue, Lightning, and Charlotte. The fighting resulted in the large pedestal holding the Aphotic Orb to crumble and send the artifact to the floor, which prompted Calamis to go check on it.

Scarlet and Charlotte, having decided to go check out the source of the growing darkness, end up finding Calamis, already moving to protect the Orb; it made no effort to confront the two Mobians, however.

Calamis is possessed of terrifying physical strength, able to smash through practically anything that stands in its way; it can even can smash through thick steel plating with one strike. The Tenebrite armor covering parts of its body is as hard as diamonds, and conventional weapons do nothing to damage it. Even the unarmored parts of its body are still quite durable (to a lesser degree, of course), being covered by thick black fur that acts as a natural shield. It has the strength to lift a tank over its head and throw it, as well.

Its jaws, claws, and tail are powerful weapons; it can bite through steel with ease, its huge Tenebrite claws are incredibly hard and sharp, and its long tail is well-muscled, more than capable of knocking people right off their feet and even bowling large, heavy objects over with one swing. Of course, Calamis is also capable of powerful Spectramancy, and can wield high-level techniques of the Darkness element with ease. Being in any significantly dark area strengthens its Spectramancy and also grants it access to a healing factor, allowing it to recover from wounds more quickly so long as it remains within the darkness. Additionally, its Tenebrite armor allows it to absorb and nullify sources of non-Elemental (I.E, mundane) light.

Calamis is immune to the Element of Darkness, and in fact can heal itself slightly when struck by a Darkness-aligned attack. It boasts incredible durability thanks to the diamond-hard armor of Tenebrite covering most of its body, and even the places not covered by this mineral armor are still quite resilient.

Calamis is weak to the Element of Light. While still having respectable resistance, it suffers more from energy-based attacks than it does physical ones. It is also incapable of swimming, and its eyes are incredibly sensitive to light, to the point where bright lights can incapacitate it temporarily; this can be dangerous, however, as being blinded can lead to it flailing around wildly in a panic. Calamis is also not very fast for its size, nor is it incredibly agile, and often has no choice but to take any attack that comes its way.

It's difficult to say if Calamis actually has a "personality"; it seems to be driven by a primal desire to keep the Aphotic Orb of Voidstar from leaving its grasp, almost as if it were protecting it. Calamis will chase after anyone who dares to steal the Orb from it, not caring who or what gets in its way, although it doesn't deliberately attempt to destroy or kill; it focuses purely on doing what needs to be done (in its eyes) in order to get the Orb back to safety, and if it means destroying a potential aggressor or two (or even more), then so be it.

Despite this, Calamis is not truly a mindless creature. While it is highly instinct-driven, it seems to have some rudimentary level of sapience, somewhat more than that of a wild animal. Like a wild animal, however, it will defend itself if attacked, and will, of course, attack anyone that tries to steal the Aphotic Orb. If left to its own devices, however, Calamis is entirely harmless, having little to no desire to engage others in any way if it can help it. 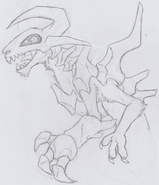 Prototype
Add a photo to this gallery
Retrieved from "https://sonicfanon.fandom.com/wiki/Calamis?oldid=1868300"
Community content is available under CC-BY-SA unless otherwise noted.