The author of Calamari the Squid considers this page to be unfinished. As such, some sections may change. 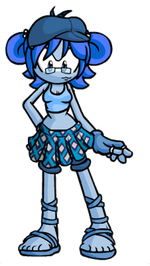 Calamari is a wacky, energetic squid with a knack for competition. She loves spraying stuff in all different kinds of colored inks, which is usually done in graffiti on the sides of buildings in Squidlantis. She can sometimes be reckless and a troublemaker, and loves being the main attraction and forming a crowd around her.

Calamari was born in an underwater dome city named Squidlantis. As a child, Calamari was unable to fully control her squid to mobian form, so she usually just stayed in her Mobian form. She also couldn’t completely control her chromokinesis, meaning that during most of her childhood she remained shades of blue. This was how she received her nickname, Blue. But it wasn’t embarrassing to her, since most children her age could not fully control their powers until they were 13 or 14.

As Calamari got older, she began to gain better control of her powers. The squid was able to transform from her Mobian state to a 100% squid form easily, and also could change her colors to whatever she liked. Despite this, her friends still called her by her nickname Blue, which she didn’t seem to mind much.

Retrieved from "https://sonicfanon.fandom.com/wiki/Calamari_the_Squid?oldid=1690200"
Community content is available under CC-BY-SA unless otherwise noted.