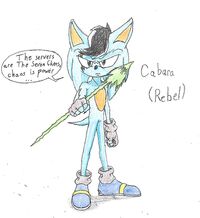 Cabara is usually a reserved, intelligent, and steadfast soldier who highly values his friends, family, and freedom. He is also very compassionate and daring, putting the lives of others before his own; despite what disadvantages he may face. However, though he may sound like the perfect soldier, he is not without flaws; though he is recognized for his stoic behavior, he can be quick to anger in certain situations, thus blinding him to more sensible decisions. Same can be said about his fears, hindering his judgement sometimes leading him to make mistakes.

It was his first birthday, and the wicked Apocalypse was resurrected. During the battle to save Mobius, Sonic was killed; with one of their best gone, and hordes of demons overrunning Mobius, people decided to take refuge on planet Rabba. While others would stay and wage war against the "King of Chaos" and his worldwide armada of demons. Raised without a father and in a time of war, Cabara's heart was scarred where the only things that kept his emo-ism at bay were his friends and remaining family, especially his childhood friend Sarah. Through out his life he received training from uncles Knuckles, Shadow and Tails; though he's not yet at their level he is still quite strong, powerful and smart respectively. He later joined a segment of G.U.N. that is specifically designed for dealing with these manifestations of evil, it was known as the Demon Slayer Organization or D.S.O. for short(yes, this idea was inspired by bleach). His uncle, Garus, was once a captain in charge of one the classes, but one mission unfortunately ended up pitting him against Deception. The injuries were severe and he was relieved of duty. Cabara is the speed formation member of a team in the Neo Dark class, which is lead by Shadow. As such, he is the team's leader which consists of the power formation: Bronx and flying formation: Sarah, together they form Team Cabara. They are also acquainted with Helen and Melanie, fellow class members and two other power formation soldiers. Team Cabara went on plenty of missions and succeeded in all of them.

With his connection to the Chaos Force, Cabara can control chaos energy for a variety of effects like projecting energy blasts and constructs, manipulating space-time, augmenting physical capabilities, and more.

Cabara can stretch various parts of his body to incredible lengths, and reshape them into different forms like whips and hammers.

His personal training sessions with Shadow and Knuckles allowed him to push his body to the limit and beyond; making Cabara incredibly strong and quick on his feet. Much like his father, he can reach massively faster than light speeds with ease with his top speed being unknown; he also seems to be nearly inexhaustible. Despite his small stature, Cabara is also pretty tough and can take quite a beating from enemies much larger than himself.

Cabara is well-versed in armed and unarmed combat. He is highly skilled in boxing and judo, using his immense strength and speed to get the upper hand on his opponents; he can also use bo staffs, swords, and firearms with great efficiency. Being a seasoned strategist, he is able to come up with different tactics to use on his opponent.

Cabara can generate wind currents to create lift and move through the air.

By meeting certain criteria, Cabara can access chaos energy to initiate one of two transformations; becoming either Chaos Cabara or Super Cabara.

While Cabara is powerful, his abilities are somewhat limited; with enough physical trauma, an opponent can knock him out or kill him. He has limited access to chaos energy and going too far beyond that limit will force him into the Chaos Force. He can only stretch so far and his rubbery body is vulnerable to cutting weapons. More experienced and powerful opponents can beat him in a fight.

Retrieved from "https://sonicfanon.fandom.com/wiki/Cabara?oldid=1885497"
Community content is available under CC-BY-SA unless otherwise noted.