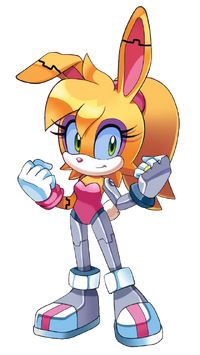 Bunnie D'Coolette, birth name Bunnie Rabbot (pronounced rah-bow),[1][2] is a protagonist in the Sonic the Hedgehog comic series and its spin-offs published by Archie Comics. She is a Rabbit (though partially robotic), the wife of Antoine D'Coolette and a member of the Freedom Fighters. Originally she was a regular person, but when Dr. Eggman made his first attack on Mobotropolis, Bunnie suffered severe injuries and the only way to save her life was by having parts of her body replaced with cybernetics by Charles the Hedgehog. Since then, she has used her cybernetics to better serve the Freedom Fighters, and together with her friends, she has been fighting the evil forces of the Eggman Empire, and them the created this call R-FF know as Freedom Fighters, and is back alive good again call Freedom Fighters 2.0.

Bunnie is a mobian golden rabbit with pale yellow fur, a white muzzle, and vibrant emerald-green eyes. Her eyelids (as well as around the eyes themselves) are generally violet or pink and her right ear is often flopped, though this is not a constant feature. Her hair, starting off as a tuft of bangs on the back of her neck and forehead, grew from childhood into shoulder-length, and then down to her waist which she began tying back in a single ponytail.

Bunnie most pronounced feature are her cyborg limbs as a result of her roboticization, with her left arm and lower torso from the waist being cybernetic. Originally being more clunky and heavy in appearance, her robotic parts were replaced with sleeker, more modern versions.

As a child, Bunnie wore purple overalls, a white shirt, gloves, and bows at the tip of her ears. After her roboticization, Bunnie began wearing a pink singlet instead and eventually discarded her bows after becoming older. She originally had jet-black eyes.

Much of Bunnie's early life is unknown. As a child, she was found in the Royal Hills Zone by Rosie Woodchuck and Uncle Chuck, with no indication of where the young rabbit had come from.[1] She was taken to the city of Mobotropolis where she was raised under Rosie's care, until the city was taken over by Dr. Eggman. It was during this attack that Bunnie sustained some severe injuries. She was taken to Knothole Village and in order to save her life from these injuries, she was forced to have half of her body replaced with cybernetic limbs by Chuck.

Learning how to walk with her new robotic limbs was not only painful, but embarrassing (becoming more clumsy as a result), which would lead to her and being picked on by other children, who purposely pronounced her last name as "Rab-BOT". Her spirits were lifted when Miles "Tails" Prower, another child under Rosie's care, reassured her that he did not care that she has robotic parts, and that he saw her as a big sister. Some of her fellow refugees expressed similar feelings, and treated her as no different, inspiring Bunnie to make the most of this, striving to live her life to the fullest. Under Rosie's supervision, Bunnie tried with all her might to function properly with her cybernetics. Her bravery inspired Antoine D'Coolette to become braver, though Bunnie reassured him that it was not him "being brave" that made him brave, but him overcoming his fears were the reason he was brave.

A hedgehog by the name of Sonic came by the village, promising to defeat Dr. Eggman and save King Nigel Acorn. Though Bunnie and the others had their doubts, Sonic managed to pull through on South Island. This inspired her to join Sally Acorn, Tails, Rotor the Walrus and Antoine in forming the Freedom Fighters, fully abandoning her wheelchair. As time passed, it became apparent that Bunnie's limbs needed an upgrade. She accepted, even though it would greatly decrease the chances of her ever getting her old limbs back. But Antoine reassured her that it wouldn't affect her courageous heart and beautiful spirit. The two had become close before Antoine asked for her hand in marriage, which she happily accepted.


Cite error: <ref> tags exist, but no <references/> tag was found
Retrieved from "https://sonicfanon.fandom.com/wiki/Bunnie_%27%27Rabbot%27%27_D%27Coolette_R-FF_(STHXSTFOHMAU_Version)?oldid=1870361"
Community content is available under CC-BY-SA unless otherwise noted.