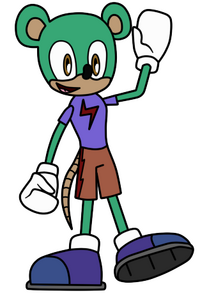 Bunky Octopretzel is a teal, anthropomorphic, toon House Mouse. He is very swift and athletic, and loves making friends with people. His best friend is Shawn the Bandicoot.

Bunky has teal colored hair, and big mouse ears. He has a slightly dark muzzle with a long nose. His eyes are brown/hazel, and he has a mouse tail the same color as his muzzle. He wears a sharp violet t-shirt with a red lightning bolt on it. He also wears ruddy brown shorts with a larger red lightning bolt on the side. He sportspurple and blue tennis shoes along with white socks and white mittens.

Bunky is a very outgoing toon. He has always lived in towns with small amounts of people, and Bunky has always tried to befriend as many as he could. Because of his large amount of friends, he has grown to crave attention a little bit. He thrives when people are paying attention to him, and works very well under pressure. Despite his friendly nature, Bunky has trouble listening to people when they talk to him. He is usually staring into space, hearing words but not listening to them one bit.

Bunky is extremely excitable. He is noted where he lives for having a large amount of energy at all times. He is especially energetic when doing things he enjoyes. However, Bunky will basically do anything with a smile on his face. He gets excited over many simple things which, according to other toons, makes him so likable.

Bunky is always cracking jokes, and lives to make people laugh and smile. He tends to try to cheer people up quite a bit, and likes to lighten the mood if its gets heavy or tense. He can be petty and selfish, usually wanting people to pay attention to him. But deep down, Bunky enjoys making people feel good, though some of his jokes do not come across as uplifting.

After Toonada was taken over completely by sprocket baddies, every toon at the time was forced to find residence elsewhere. Although the takeover only lasted a few months, the evicted toons could not return. Bunky was one of the first many hundred toons to move in after the takeover ended, and immediately began training to stop them again. He currently rents an estate in Silly Bleet with a toon horse, though he spends most of his time in Toonada in Docks. Bunky, along with many other toons, can only be in Toonada for hours at a time until he finds a key that will guarantee him a permenant residence there.

As stated above, Bunky is very good at making friends with others, being popular where he lives. He is also very swift and speedy. He runs at a fast speed and is skilled at dodging attacks. Along with running, Bunky is also a fast climber, and can climb almost any surface with little effort. He does not have a lot of stamina, but makes up for it in his impressive speed.

Bunky has basic abilities such as the Spin Jump and Spin Dash. He can also whip others with his tail, and being a speed type, and use homing attack and triangle jump.

Bunky in an alternate outfit (in Toontown)
Add a photo to this gallery
Retrieved from "https://sonicfanon.fandom.com/wiki/Bunky_Octopretzel?oldid=1520306"
Community content is available under CC-BY-SA unless otherwise noted.