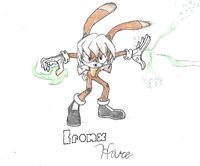 Bronx has a strong will, this stubbornness of his is what allowed him to endure the training and experiments necessary to get as strong as he is as well as survive months of physical and mental torture before getting rescued. He is quite energetic as well, a quick-thinker who's even quicker to act; in fact, it wouldn't be inaccurate to say he's a bit impatient. Confident to a fault, he often looks down on those whom he doesn't recognize as powerful. Bronx likes playing sports, listening to music and eating fruit. However, as someone who takes pride in strength, he detests feeling vulnerable; but due to his imprisonment, he has developed hydrophobia and thus he doesn't like water or feeling trapped.

As a child, Bronx always held power in high regard; both political and physical. Inspired by heroes in fiction as well as reality, he set himself a goal of becoming the most powerful and famous hero on Rabba. With this goal in mind, Bronx attended a school for demon slayers; and it is here where he developed the skills and powers that he had sought for the purpose of achieving his goal, even getting recognized as one of the top 20 power types in the academy. Being one of the few power types that could actually beat technique types, he took a great deal of pride in his strength and endurance; sometimes even boasting about it. This is also where he first met Cabara, one of the only speed types he ever lost to; he was especially interested in beating him once he learned that Cabara was the son of the legendary Sonic the Hedgehog. He would eventually be assigned to Team Cabara, assisting in numerous successful missions using his immense strength and pyrokinesis. However, he would volunteer in one mission that would bring him face to face with a demon well out of his league. Having been captured and detained for months, he's been tortured for their amusement.

Bronx possesses supernatural levels of strength and speed due to his exposure to chaos energy; thanks to this, he is able to fight and slay multiple high ranking demons on his own. He is strong enough to one-shot higher ranked demon giants. Though not as fast as his teammates, he can still outpace the highest ranking troopers who can move in excess of the speed of light. He's survived supercharged hits from demons with enough power to tear holes in space-time. His stamina is virtually inexhaustible

Like other seasoned agents in the organization, Bronx has years of combat training and experience; specializing in hand-to-hand combat, he is a master of multiple martial arts. Though he can use long range attacks and firearms, he is less skilled in using them than his own fists.

Brox has a crippling fear of water that often stuns him at the mere sight of it. Stronger opponents can overpower him. More skilled users of chaos energy can counter his chaos powers. Water can extinguish fire. Pride, as well as fear, can cloud his judgement; leading him to make mistakes.

Retrieved from "https://sonicfanon.fandom.com/wiki/Bronx_Hare?oldid=1873053"
Community content is available under CC-BY-SA unless otherwise noted.