"Don't forget--if you try to beat the house, the house beats you."
—Breezie the Hedgehog, Sonic the Fighters 2 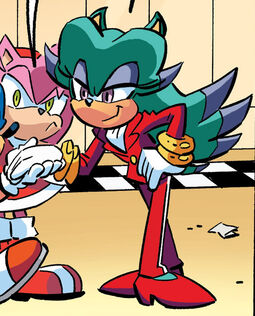 Breezie the Hedgehog is a character that appears in the Marshalia13 Universe. She is a mobian hedgehog and businesswoman, who is the head of her own media empire. She once joined forces with Dr. Eggman and allowed herself to be used in a plot to keep tabs on Sonic the Hedgehog during one of his adventures. She later severed ties with the doctor, going on to found Breeze Media.

Breezie is a slightly-taller-than-average female mobian hedgehog with green fur and purple irises. She has long quill gatherings with blue highlighted tips that fall behind her head, resembling long hair, and has two smaller and curved bangs of quills on her forehead. She also has purple irises, peach skin and a short black snout. She wears a red dress with red high heels, a white undershirt, yellow buttons, and white gloves being held together by yellow cuff rings. She appears to wear makeup, having purple eyelids and, in her initial appearance, red lipstick. She has also been seen wearing glasses.

Breezie first met Sonic the Hedgehog some years back when Sonic "rescued" her from the Super Special Sonic Search and Smash Squad, after which he temporarily became her traveling companion. However, it would prove to be a trap laid by Dr. Eggman, with Breezie eventually revealing that she had been informing him of Sonic's whereabouts throughout his adventures during his confrontation with the prototype Silver Sonic. When confronted about her choice and how it endangered Sonic's friend Tails, Breezie responded that her own future would be secured by Eggman, from whom she later severed ties. Breezie eventually became owner of Breeze Media, the largest entertainment network in the world, and established herself in Casino Park, which was built not by Eggman, but by Neo Metal Sonic. During this time, she showed an attraction towards the robot, noting how similar they were in that they were both trying to get out of under the shadow of Eggman. Her operation was bolstered by the fact that Eggman began selling her his old robots, which she turned to use as her staff. She also billed herself as having risen from a rough childhood to success.

In Sonic the Fighters 2, after Breezie comes into contact with a chaos emerald, she holds a tournament with the emerald as a prize in order to benefit from the popularity. Her advertising, attracts the attention of Team Sonic, the Freedom Fighters, G.U.N., and the Hooligans (mercenaries hired by Dr. Eggman) to name a few.

In Marsha the Fox, Breezie sends the Destruxtix, her enforcers after Marsha disrupts Casino Zone, stating that she was driving away business and profit.

Breezie is rather audacious, unconcerned of the idea of advertising her valuable Chaos Emerald as a prize for her fighting tournament to attract competitors. She is also quite confident and unnerved in the face of demands and treats, though when she finds her demands or desires turned against her, she can be quite scary.

Sinister, yet flirty, her primary motivation appears to be how she can best advance her own situation, regardless of who might have to suffer for it. She possesses a rather amoral view of things, caring nothing for "good" or "evil" but thinking only in terms of her own betterment.

Breezie is quite confident in the face of Dr. Eggman's demands, apparently having respect for her old master. Despite this, she is not above ridiculing him for laughs.

Breezie tends to flirt with Sonic once in a while, although this may just be an attempt to annoy Sonic or make Amy jealous rather than being an actual attraction.

Breezie has demonstrated an admiration of Metal Sonic's desire to strike out on his own, a goal that she shared.

Retrieved from "https://sonicfanon.fandom.com/wiki/Breezie_the_Hedgehog_(Marshalia13%27s_Universe)?oldid=1786811"
Community content is available under CC-BY-SA unless otherwise noted.