The Braxxians are a formerly human race that hail from the planet Braxxus. They were once members of the Igarrian Empire who grew animosity and angst towards the the former Igarrian tyrant ruler King Laigus. As a act of defiance against the Braxxian clans separated from the Igarrian Empire and migrated to the planet Braxxus. There they decided to overthrow their former oppressive leader via upgrading their bodies to become cybernetic super soldiers and declaring war on Laigus and his forces. Fortunately when they arrived on the planet Ruria they found that Laigus had been dethroned and they left back to their new homeworld to build a better, more cybernetic lifestyle for themselves. Sadly this soon gave way to notions of superiority, and hatred to other "fleshful" lifeforms. This would fuel the fires for Braxxian aggression across the galaxy.  They are the mortal enemies of their former brethren, the Igarrians.

The mysterious Overseer is believed to be the highest ranking member within the Braxxian Empire. As its title depicts it oversees most of the operations on Braxxus, as well as oversees the Braxxian Empires generals who lead the army. Braxxian generals still maintain their tactical prowess even after "upgrading".

Braxxians are indubitably atheist and their beliefs are very technocratic. However despite their cybernetic conformity. the Braxxians do believe in individualism and free thought. Provided the thinker is loyal to them without question of course. Braxxians download all their thoughts into what is known as the "Motherframe".This Braxxian super computer mainframe stores their thoughts for review. Any productive ideas or thoughts are looked upon favorably, while any traitorous thoughts can lead to permanent dismantelisation.

The Braxxian Empire is known to be quite aggressive, as such Braxxus has expanded their planetary borders past their homeworld and into neighboring planets such as: Slova, Sligyar, Seris, Tundras, even outposts on Duna. However due to decisive military actions on Duna, Ruria, and Tundras, many Braxxian Empire claimed planets are actually contested and share a fair bit of resistance. Also during the Dark Void Incursion planets such as Seris and Slova have become partially Voided Worlds.

While many Braxxian colonies exist on several worlds with variable climates and conditions, the homeworld of Braxxus is the their main habitat. Braxxus is a heavily industrialized world which has succumbed to high amounts of urbanization. As such acid rain storms are quite frequent. However due to the Braxxian "Mothershield" technology which domes and protects their cities, the citizens of Braxxus's cities are mostly protected from the elements. Inside the cities cybernetic life is abundant and their citizens enjoy the benefits of commerce and technology.

Braxxians "upgrade" themselves with cybernetic parts willingly, such as voluntary legionization under Eggman. Yet the Braxxians do so to benefit themselves. Many Braxxians view un upgraded individuals as primitive or foolish. 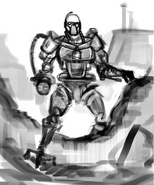