Start a Wiki
This is an article about Brandon the T-Rex, a character created by Jaredthefox92 on 08/8/2015. 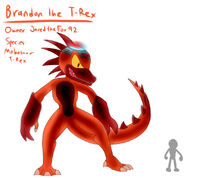 Retrieved from "https://sonicfanon.fandom.com/wiki/Brandon_the_T-Rex?oldid=1693966"
Community content is available under CC-BY-SA unless otherwise noted.