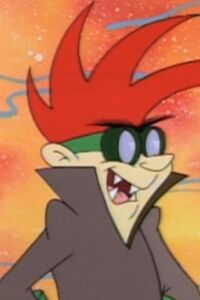 Destruction Taking over the world

Quark is a Short and Skinny man with bold spiky Ginger hair. He wears Goggles, has sharp teeth and has white skin. He wears a gray suit with green gloves, and green webbed feet and a belt with a yellow buckle.

When causing havoc he's got a personality similar to Robotnik with added temper tantrums when things go wrong.

When he's being a single parent he's completely the opposite and he treats his synthetic sons and daughters like royalty.

In his early years he was trying to experiment on ducks when his experiment went wrong turning him into a Half man Half Duck Hybrid Dr. Quark was just another CEG (Crazy Evil Genius) trying to take over Mobius. When he first meet Robotnik they were rivals then friends then they hated each other after he flew south for the winter. He decided to settle down in Little Planet and said to return to Mobius another time.

He lives with his minions and family in Little Planet and got a surprise visit from a desperate Scratch Grounder and Coconuts with the help of Robotnik's Cousin warping them to Little Planet they had left Robotnik after being kicked out and just had enough of the neglect from him and they joined him. They're living a better Life in the hands of Quark. Scratch Grounder and Coconuts Earn 10 Mobiums/1000 rings per hour.

By flapping his arms fast he can sustain flight. He's also has high intelligence. And is very skilled in Mechanics

He's quick to anger and as such will go through temper tantrums.

Retrieved from "https://sonicfanon.fandom.com/wiki/Brandon_Rex_Quark?oldid=1884593"
Community content is available under CC-BY-SA unless otherwise noted.