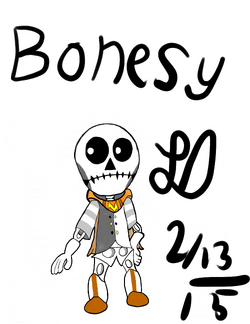 Bonesy is a semi-humanoid skeleton with a large skull and small, beady eyes within the eye-holes. He wears an orange cape that was once the flag for his former ship, but the symbol can only really be seen from the back (that being a skull with a bomb in one eye-hole.) On the front part of the cape, where it connects around the neck is a stitched-on emblem of a yellow M in an orange circle. Bonesy also wears a gray/white striped undershirt, as well as orange/white explosion-proof boots that help him get places faster by way of explosion-jumping.

In his youth, Bonesy was once a famous pirate captain by the name of "Melvin Jango," but known to the world as Captain Bomber, leader of a crew named the Firecrack Pirates, who specialized in cannon-battle and use of explosives, and also the pirate cursed with the Boom-Soul, giving him the ability to spawn bombs and other minor explosives from thin air. Their constant raids of other pirates brought them great fortune and fame, whether it be plundering ships for treasure and food or rescuing slaves or towns from the wrath of other pirates, though would also make them be considered to be larger and larger threats to the world by both the ruling powers (equivalent of the United Nations) and higher-tier pirates.

The antics of his crew would eventually become their downfall. As they sailed across the many oceans of the world, they would come across stronger and stronger pirate crews and a steadily increasing amount of soldiers dispatched to deal with them by the ruling powers. This would eventually force the Firecrack Pirates into hiding, and eventually mutiny broke out over what to do next. This infight would lead to an accidental explosion fueled by all of the various explosions they were currently making and carrying on the ship, and Melvin was sent flying far into the horizon, lucky that he was mostly intact (as he was standing on more of the outer area of the ship.)

Captain Bomber would eventually wash ashore the beach of an empty island far from civilization, and tried to build a raft to escape, but his injuries would leave him exhausted and incapable of working much. Melvin would eventually die a few short days later from dehydration, as he was too injured to search for fresh water to drink. Thus ended the fame of the Firecrack Pirates, whose notorious fame would be known throughout many generations to come, thus preventing them from falling to the Void of Memory.

Eventually, Melvin's corpse (now reduced to a mere skeleton) would be found by an oddly-dressed necromancer and would be revived shortly after. Once awakening from his long slumber, Melvin would find the world to be much different than what he had remembered, and began to suffer from severe futureshock, being confused and somewhat fearful of all of the new things being forced into what remained of his eyes. He would quicklybe lost in all of the new information and innovation brought on from the many years he had spent dead and had found himself quickly alone in the world.

He was eventually approached by a short purple being named Jared, who was scouting for people to join his revived company EQuartz Industries, and Bonesy was interested in the idea of getting to meet so many people plus be able to more easily learn of the new world he was lost in, and joined. He was partnered up with a flame spirit named Willow, and at first, neither of them really spoke to each other, as both were somewhat shy. One day, they just simply started talking to each other, and enjoyed it. Since then, they would talk more, and a bond grew between them that only grew with each conversation. Now they are an inseperable duo,

Bonesy's major point is in his special powers. Carried over from his past life is his ability to spawn explosives from nowhere due to being cursed with the legendary Boom-Soul. After his resurrection, he was granted with immortality, making him unable to die with age. He is also, as you would expect, seemingly immune to explosions, often using them to propel himself to greater heights. Beyond this, he is capable of using any "bone" related attacks, and can even throw pieces of himself around. Having no nerves, Bonesy is practically immune to fire damage, as he will not feel the pain normally brought on by intense heats touching one's skin due to not having any of his own.

Bonesy runs a bit of a short-fuse (ha ha, very funny), and can easily snap on someone if provoked enough. Due to his lack of skin and flesh, he is a lightweight and can be picked up quite easily. If submerged, Bonesy will have issues getting out due to the water going through his entire body, as there is no skin on him to prevent this. His ability to take off pieces of himself can also be a weakness, as it makes him much less capable of taking stronger hits without falling apart. Despite his inability to feel warm temperatures, Bonesy, for whatever reason, performs somewhat worse in colder climates, and will freeze up almost immediatly when cold enough due to having no internal source of body heat. 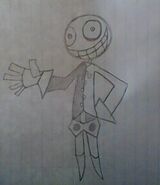 First (I don't know when) 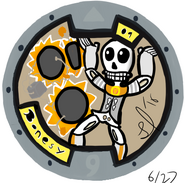 summoning MYSTERIOUS!
Add a photo to this gallery

Retrieved from "https://sonicfanon.fandom.com/wiki/Bonesy_Bomber?oldid=1674985"
Community content is available under CC-BY-SA unless otherwise noted.