Boltrunner the Boltund is a character who appears in The Legend of Fox the Brave. He is a male Boltund, a former loner who lived in Galar, and a warrior of Rogue Squad. He made his debut as the protagonist of An Adventure in Galar, the introduction of Galarian Pokemon in to the series following the release of Pokemon Sword and Shield 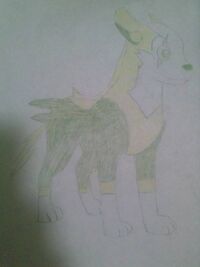 Boltrunner is a dog-like Pokemon with green fur on his shoulders, flanks, hips, and the upper half of his legs, as well as inside his ears, green eyes, and a green nose. He has yellow fur on his head, chest, back, and tail, yellow bands on all four legs, and yellow hind paws, white fur on his face, and white forepaws. He also has a distinctive scar stretching over his right eye. When relaxed, his tail is straight with two points, but when hostile or angry, his tail resembles a lightning bolt and is commonly level with his spine.

Normally Boltrunner is calm, laid-back, and friendly, but due to a traumatic event in his youth, he can be prickly, defensive, standoffish, and a bit reserved. He is distrustful of strangers and tends to hold a grudge. When someone earns his ire, he can be very angry with them, often ready to attack at a moment's notice. Due to being by himself for so long, he is not comfortable in large crowds.

Boltrunner was born, as Boltpup, to an unnamed pack of Boltund, as the son of its leader Swiftstrike and her mate Thunderfoot. However, when Boltpup was about to receive his apprentice name, he was snatched by a Corviknight working for a cruel rogue known as Corbin. Boltpup escaped, but was attacked by a Corvisquire after he did, which gave him the wound on his face. He was found by a Nickit named Talia, who took him under her wing, and helped him learn how to survive on his own. Later, Boltpup, now a Boltund called Boltpaw, is given his full name by his friend Talia, who has evolved into Thievul. He silently begs her not to name him Boltscar, and she gives him the name Boltrunner. After a while, they run into a group of traveling warriors, along with a native Pokemon and two Trainers, and tag along. However, they run into trouble with Corbin when one of his cronies kidnaps a native. There, Talia reveals her true nature, betraying the group. Angry, Boltrunner leaves the warriors to find his pack by himself. When he does find them, he tries to his in, but can't. After a big battle, he decides to leave, with a Yamper apprentice named Windpaw tagging along, despite his protests. The two are attacked along the way to find the warriors, and Windpaw evolves into a Boltund herself, taking then name Windstrike. They find the warriors, and stick with them until they head to the Four Worlds. Just before they do, Windstrike shows Boltrunner a Yamper Egg, revealing that they are going to be parents.

Later, in a Google Doc story, Boltrunner settles into warrior life well. When the Yamper Egg hatches, Windstrike suggests naming their new daughter Stormpup, after the Storming Alliance, to which Boltrunner agrees.

Being an Electric-Type Pokemon, Boltrunner can generate electricity at will. He generally does this for his attacks, when he runs, and as a display of hostility.

Though not revealed yet, his moveset is confirmed to be Crunch, Thunder Fang, Thunder, and Wild Charge. He is only shown to be using Spark, which was most likely replaced at some point

As Yamper, Boltpup's Ability was Ball Fetch, which allows a Trainer(in-game only) to retrieve the first failed PokeBall

As Boltund, Boltrunner's Ability is Strong Jaw, which boosts the power of bite moves. This gives him a boost to Crunch and Thunder Fang

Boltrunner is very fast and agile, able to make tight turns at a moment's notice, and outrun even a Midday or Dusk Lycanroc if it isn't using Accelerock. He also has incredible endurance, as he is able to run for up to three days, by channeling electricity to his legs.

Being an Electric-Type Pokemon, Boltrunner is weak to Ground-Type attacks

Boltrunner is the first Galar Pokemon to be a protagonist

He is also the third protagonist to not come from the Four Worlds, the first being Austin Smith, and the second being Boulder the Lycanroc

Retrieved from "https://sonicfanon.fandom.com/wiki/Boltrunner_the_Boltund?oldid=1865228"
Community content is available under CC-BY-SA unless otherwise noted.