Start a Wiki
This is an article about Bolt the Cheetah, a character created by Spyken (Emidikun on DeviantArt) on November 18, 2012. 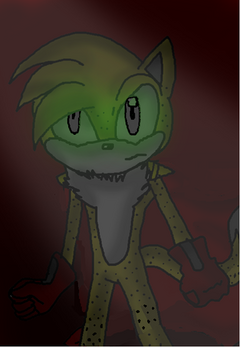 Bolt is a yellow cheetah with black dots, grey eyes and a lot of chestfur. He has 3 front bangs, which along with his speed made people think he was the Silver Stranger.

He currently only wears bordeau gloves and boots.

Ten years later he got a bit taller and grew out his hair. He also started wearing an orange sleeveless vest.

Bolt is a selfish, selfabsorbed prick as described by his sister. He really enjoyed being in the spotlights and took every possibilty to rise his popularity. This backfired when his lie about being the Silver Stranger was found out.

Afterwards he developped an inferiority complex on Spikes and became obsessed with taking revenge on him, starting a cat and mouse game which the hedgehog took great pleasure in.

Bolt was an orphan and lived with his sister in the slums. He took it upon him to provide them with food and became a thief, using his superior speed to his advantage.

One day he was noticed by a recruiter who offered Bolt a scholarship if he entered his high school's track team. Bolt accepted under the condition that his sister would get one too. The man accepted, under his condition that Bolt had to be the number 1 of the team. Should he ever lose that position,she would lose all funds. Bolt agreed and the siblings entered high school.

Above average speed: Being a cheetah, Bolt is naturally quite fast, but his speed is exceptional even for his own species. He is able to keep up with Spikes until he reaches superspeed and his Olympic record has yet to be approached.

Immense stamina: His time in the Olympic team contributed to a high amount of stamina, but after he was kicked out he showed very impressive feats of running for extended periods.

Shadow Claws: An abilty given to him by Flix, this surrounds his claws with a dark aura and enables them to cut through almost anything. He can also scratch people from a distance. He becomes more violent when he uses the ability though.

Overconfidence: Bolt has more than often too much confidence in his abilities, causing him to underestimate opponents.

Flix dependency: Due to Flix giving him Shadow Claws, Bolt requires his well-being. The weaker Flix becomes, the weaker his abilty gets.

1 of 3
Add photo
Retrieved from "https://sonicfanon.fandom.com/wiki/Bolt_the_Cheetah?oldid=1820385"
Community content is available under CC-BY-SA unless otherwise noted.