Bokkun is Dr. Eggman's messenger robot, who is also canon in the Sonic X series. He was made to deliver some of Eggman's messages to Sonic and co. He works for the Eggman Empire, along with Bocoe and Decoe . Because Dr. Eggman is an ally to Joseph T. Marley , they are allies to him as well. 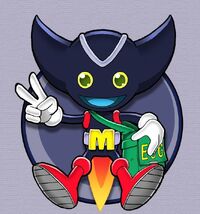 What he thinks is “funny”

Delivering Messages with bombs in them

Oil
Dislikes
The joke being on him

TV Bombs can be used as a weapon
Weaponry
TV Bombs

Bokkun was created as Dr. Eggman's messenger robot, designed to deliver his messages to Sonic and co. or anyone else he intended to send a message to. He works for the Eggman Empire, along with Bocoe and Decoe. He had also gained a crush on Cream, not long after meeting her.

Bokkun first appears in the third part of Chapter 4, when he tells Bocoe and Decoe to stop Tails from escaping. He is seen again when Scratch and Grounder are holding him hostage by the time they get back. He is the one to point our Tails escaping, though he is flying too fast for anyone to catch him.

So far, Bokkun seems to have no differences from his canon counterpart. If he does have any differences, they have yet to be shown.

Bokkun is capable of flight, due to the jet pack strapped on his back.

He seems to have some form of super strength, and is a surprisingly strong opponent in battle.

His TV Bombs can be used as weapons.

So far, Bokkun's only known weakness is that he is capable of feeling hunger, and it is possible if he goes too long without eating, he may starve.

Retrieved from "https://sonicfanon.fandom.com/wiki/Bokkun_(IncaIceBunny%27s_Universe)?oldid=1838141"
Community content is available under CC-BY-SA unless otherwise noted.