Maybe you haven't seen my pure awesomeness yet! 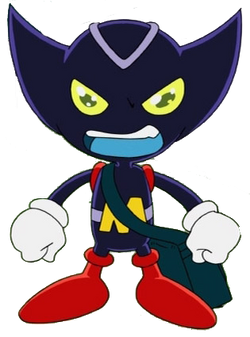 Bokkun is a fictional anthropomofric robot created by SEGA. He is the former messanger robo of Doctor Eggman and the main enemy of Louis and his circle of friends.

Bokkun was created by Doctor Eggman and programed to be a messanger robo. He was young at the time and very playful. He was a huge jokester and loved cake. Not much is known about his very very early life.

As Eggman's message robo, he'd usually send messages to Sonic and his friends from Eggman. He also likes to make self-destructing TV's. It always got on their nerves, and it wouldn't go away.

Later on, Eggman made a brilliant idea. Eggman tricked his adoptive son, Louis, into playing a complex egyptian-like guitar melody. He recorded that melody and installed it as a chip. This chip allowed Bokkun to take the shape/form of whatever mobian he wants. However, the only effects make you look like the person.

After Eggman ran the Transformation test on Bokkun, he quit working for him to become his own person. He "grew up" and then got interested in ice skating. That's where he met Louis, the person who won against him in his first competition.

As of now, Bokkun always pranks and takes the form of Louis and his circle of friends. He also doesn't need the song to transform anymore.

Bokkun is strangely happy all the time. He loves to make fun of people and he can get really annoying sometimes. He won't ever stop talking and gets on people's nerves.

Bokkun loves to embarrass people. He always transforms into somebody and mocks them by doing embarrassing things. He is highly unliked and most people fall for this.

Bokkun has the ability to transform into anything. With the chip that Doctor Eggman installed in him, he always tricks people into thinking that they're them.

Bokkun happens to be really good at ice skating. He has won five ribbons and entered the Ice Skating Grand Festival. He is all around fast and graceful.

Retrieved from "https://sonicfanon.fandom.com/wiki/Bokkun/Darkest_Shadow%27s_Universe?oldid=1530033"
Community content is available under CC-BY-SA unless otherwise noted.