Bocoe is a robot that was created by Dr. Eggman, and is also canon in the Sonic X series. He is most commonly seen with Decoe, and together they work for the Eggman Empire, along with Bokkun. Because Eggman is an ally to Joseph T. Marley , they are allies to him as well. 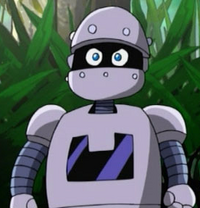 After Scratch and Grounder had broken down permanently, no longer being able to serve Dr. Eggman, he created Bocoe and Decoe in their place, as his main servants. They would and continue to complete tasks such as maintaining the machines Eggman builds. He and Decoe are hardly ever seen apart.

So far, Bocoe has no differences from his canon counterpart. He tends to be somewhat clumsy and stupid, often messing up things for Eggman. Afterwards, he and Decoe tend to reflect on their failures, similarly to Scratch and Grounder.

He, along with Decoe, have various mechanical skills, allowing him to operate Eggman's machinery.

When combine with Decoe, they can make a light to summon Bokkun.