Roly Poly Oly? What - is that a show about bugs?

Bobby is an original character created by Pumpituppartyzone. He is an anthropomorphic, Umber Brown Grizzly Bear. He is 6 years old, 70 cm tall, and weighs 12 kg. He is Fifi the Bear's little brother. His best friend is Cyan the Pig.

Bobby is one of the few characters that was originally created to be a Sonic character. He was created in either 2004 or 2005, but was always 6 years old. He used to wear overalls and a white t-shirt, but when he was mistook for Little Zippy Dynoroni multiple times, he ended up with his current clothing. He was not originally related to Fifi the Bear (because she was created in 2010), and had a crush on Cream the Rabbit.

Because he is only 6 years old, Bobby does not have much of a history. He was born in Vancouver, British Columbia, Canada. When he was 2, he moved to Spagonia all the way in Mobius with his family and started growing up there.

Although not as much as Raven the Pig or Charmy Bee, Bobby can get pretty hyper when he has enough sweets. He is smart for his age, and is very polite. He absolutley loves superheroes, and collects comic books that end up filling his room. His absolute favorite heroes are Superman, Prodigy, and Sonic the Hedgehog. He is afraid of Wolverine and Batman because, "They are really creepy and stuff!" Bobby loves playing the guitar, and has lessons every Thursday afternoon from Maggie MacBee. Bobby is very easily imfluenced, and believes almost everything people tell him. He tends to sleep a lot, and is a very heavy sleeper.

Bobby is an excellent finger painter, and can finger paint almost everything. He is also a good guitar player, at least for his own age. He is not a very effective fighter, due to the fact that he is only six years old. He has some abilites that his sister has. They are bear related fighting moves, such as Bear Claw, Roar, and Bear Bite. He can also throw very fact punches, but they barely hurt and are easily dodgable.

In this game, Bobby is a non-playable character. He is found at Illuminous Gardens, and is accused of stealing Lumina's watering can. 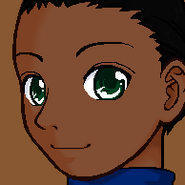 Bobby in anime. Made at http://foxrichards.deviantart.com/art/FaceMaker-52755515
Add a photo to this gallery

Retrieved from "https://sonicfanon.fandom.com/wiki/Bobby_the_Bear?oldid=1574870"
Community content is available under CC-BY-SA unless otherwise noted.