Hello! what may I do for you on this fine day? 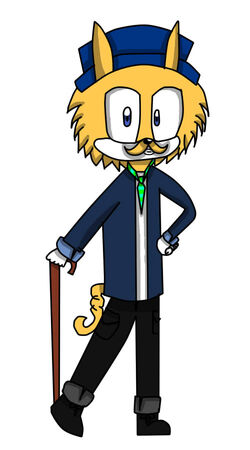 Mayor Bob the Dog is a fan character created by Darkest Shadow. He is the mayor of Mariala City. He is also the father of Alyssa the Dog and Cream the Rabbit. His work as mayor is very difficult, but is still admirred by all of Mariala City, and the towns neighboring it.

Bob stands at 3 feet and 10 inches tall, and weighs 100 lbs. His eyes are an indigo color, like the night sky. His fur is a pale golden color, and his skin underneath is white. His ears are tall and pointed up. He has shaggy and short hair. His tail is medium-length and curled. He also grew a pale gold handlebar mustache.

Bob is serious. He doesn't really laugh at jokes, especially the ones that give offense towards another person. As mayor, he takes his job serious and doesn't budge to even giggle. Although, this doesn't mean he doesn't smile. He actually smiles quite a lot.

Bob takes pride in his position as mayor and always looks for new ways to improve his city. Everyday, he takes his stroll around the city to make sure everything is going just the way it should be.

He is also very respectful. As not only a mayor, but a father, he is very concerned about his family. Since his wife and one of his daughters is far from his city, he is very protective of his daughter, Alyssa. He would do anything to protect his little girl from getting badly influenced, even if he had to order the police to arrest him.

Bob has excellent vision. He could see from up close, to a really good 800 feet. He was born like this, and apparently, he always had a perfect score in his physical results.

Being a dog, Bob has very good hearing. He can hear words from a mile away. He usually does this to inform police about crime.

Bob is very strong. Being a little bit bigger than the average mobian, Bob can knock out anyone. This makes it easy for him to stop crime.

Retrieved from "https://sonicfanon.fandom.com/wiki/Bob_the_Dog?oldid=1800455"
Community content is available under CC-BY-SA unless otherwise noted.