Pianoteen, the author of Bloodstone the Hedgehog, considers this page to be unfinished. As such, some sections may change. 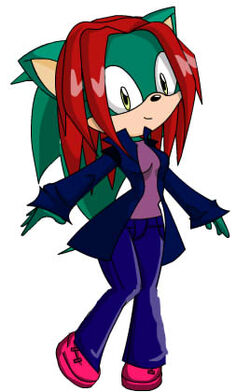 Bloodstone the Hedgehog is a fan character created by Darkest Shadow. She is the youngest child of Carly and Tempest.

Bloodstone doesn't really have a development story. At first, she was named Celia and was a sister of Alexis. But then she became the amazing Bloodstone she is today.

In times that she's free, she tries to invite her friends over her house. Since most of her friends know her big sister, Christina, they know where she lives. If her friends are busy, she asks her relatives to play. However, with Lina being in college in Gaudia, and Christina living in the Mariala Coastline Academy Dormitory, she only has two siblings to play with.  If they can't play with her, she'd just either practice dancing, or relax until the sunset.

In secret, she sometimes goes to Krys's house to study potion making. She was taught real magic, not from a horn, but from a spell book. She has a wand to cast all sorts of spells, but she needs the certain magic potion for those spells to actually work.

Bloodstone was born on May 1 from Carly and Tempest. As a baby, she was very calm and content. She'd usually start to bleed sometimes, but for her, that was normal.

Not very much is known about her earlier years.

Usually, Bloodstone would spend most of her days outdoors in a garden of flowers and watch the sky. She would sometimes imagine what those clouds even look like. She would also collect flowers for her mother and father.

When she was around 5 years old, Carly introduced her to dancing. She signed her up to do it to keep her busy. She was the youngest dancer in her class. Then, a girl named Alyssa went up to her and told her she was a pretty good dancer. Alyssa and Bloodstone became very good friends. But she wasn't the only one who found Bloodstone to be amazing.

A Pro At a Young Age

A year later, she became interested in golfing, so she took a course that Tempest signed her up for. At first, she didn't really like it. Most of the kids were older than her, but Bloodstone shoot oddly far for her age: About somewhere over 120 yards on average.

Usually, when Christina is home, Christina makes her an outfit for her to play dress up with her. Bloodstone highly recomended a princess outfit, for her to act.

While Bloodstone and Alyssa were playing a game of tag, she tripped over a unicorn's foot. She didn't cry. The unicorn remarked her of her odd bravery of not crying for such a little girl. She introduced herself as Krys. She asked Blood if she ever wanted to fly. She then enrolled her in magic. When she went back to get parental approval, Christina signed. In her shock, Bloodstone laughed when she was suprised Christina was her sister.

She was learning how to make magic potion in order for her magic to work. She was a little shaky over it, but then she finally mastered it. Krys gave Bloodstone a spell book and a magic wand. She read a spell and casted it with her wand. Her first ever spell was a flying spell, "Absavetry", that made her wand turn into a broomstick. She then actually started to fly on a broomstick.

As of now, she still is in Elementary School. She is a very good dancer, an amazing golfer, and of course, a good sorcereress student.

Bloodstone is very calm and somewhat cold. She doesn't really express her happiness as well as others do. She is very eager to play, but she isn't hyper about it. She would usually look up at the clouds and daydream. She would sometimes make remarks that are pretty harsh but true.

Bloodstone also doesn't cry very often. Even though she's a little girl, she never cried when she trips. This is because she can't feel average pain. Her calm personality also reflects on her being brave enough to not cry.

Bloodstone also happens to be very quiet. She doesn't really talk a lot, unless she's trying to stand up for herself.

Golfing- Bloodstone is a good golfer. She never really liked it as a little girl, but lots of people are amazed by her golfing skills for such a young girl. As of now, she can drive a ball over 175 yards on average! The furthest she's even shot was 254 yards. She even got to compete in a tour with many professional golfers from around the world.

Magic Sorcery and Spell Casting- With the help of Krys, Bloodstone can now perform magic. She has a magic wand and makes a special magic energy potion in order for her magic to work. She can cast all sorts of spells from charms to jinxes and even curses! She says a different word for every spell.

Baking- Bloodstone enjoys baking. She still needs the help and supervision of her mother. Usually, she would make cupcakes and pies, mostly strawberry flavored. She starts to make delicious desserts for her whole family.

Dancing- Bloodstone has a very special gift of dancing. She got accepted on the Mariala Dance Team. Her best dance type is tap dancing, and is also her favorite. Her favorite dance move is the triple time step.

Blood Manipulation/Sanguekinesis- Bloodstone can manipulate blood. She learned this at a young age and finally mastered it. She has the power to stop bleeding in one's body. She could also make blood clots appear out of her own hands. With these, she could use them against her enemies.

Walking on water- Like all Svettrecos, Bloodstone can walk on water. This came from birth, and the power runs through her father. She can decide when she wants to swim in the water. With this ability, she can chase things that have gone lost in the ocean.

Water Manipulation/Hydrokinesis- Bloodstone knows very little water manipulation. She tries not to use it as much as the others because it she believes it might jinx her blood ability.

"I wish I could turn water into ice like you."

Storm is Bloodstone's half-brother from her dad's side. They usually spend time together as family, but not when he's out with his friends.

Emerald is Bloodstone's half sister from her dad's side. To Bloodstone, Emerald is a very good sister to play and spend quality time with.

"You're dresses always make me happy."

Christina is Bloodstone's half sister from her mom's side. Usually, Bloodstone would ask Christina to make outfits for her and her friends to play dress up and pretend.

Lina is Bloodstone's other half-sister from her mom's side. They rarely ever see each other, because of Lina's college. They'd talk over the phone though.

Carly is Bloodstone's mother. They always have fun together and play. Carly's the one who taught her how to bake desserts.

"I don't want to use my water powers now, dad."

Tempest is Bloodstone's father. He doesn't see her daughter very often because he is working most of the time.

"You think I'm good? You're spectacular!"

Alyssa and Bloodstone are close friends. They'd usually spend time together and have play-dates. They are also on the same dance team.

"You're going to teach me magic?"

Krys is Bloodstone's magic instructor. She was the one who taught bloodstone how to cast magic spells from a wand.

"Alyssa was right, you are good!"

Snowflake and Bloodstone are good friends. They don't see each other, unless they're in dance class.

Roleplay Appearances Bloodstone has not made any appearances or mentioned by anyone in any roleplay yet.

Bloodstone appears in episodes that focus on either Christina, Alyssa or Krys. Most of her appearances are on the Alyssa-based episodes, being a dancer.

Retrieved from "https://sonicfanon.fandom.com/wiki/Bloodstone_the_Hedgehog?oldid=1780497"
Community content is available under CC-BY-SA unless otherwise noted.