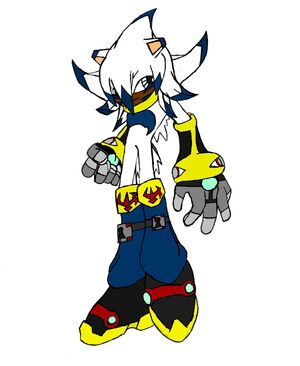 Blight is a Porcupine with a powerful ability but in a sense a curse, his name describes his ability. Blight as he is named is the user of the "Order Pearls" they are the polar opposites of the "Chaos Emeralds", Just as the Chaos Emeralds let a user throw power out the Order Pearls let Blight draw power in and utilize it as his own. Blight at a young age was forced out of his village due to the cursed markings in his hands which absorb the energy of "Chaos Control". He is my Character and Me within the world of sonic, and so I dedicate this page to him.

Blight has Spent most of his years alone in an underground city, there he was trained by his Grandfather who died when he was 13. For the past 4 years he has been seeking a way out of the underground city with the 7 Order Pearls sealed away at the Altar in the center of the city with his grandfather's tomb. There is another city next to his on the other side of the "Sacred Barrier", it is there where he was exiled from and made to be the sole protector of the Order Pearls. Blight is an adept at swordplay as a porcupine he is able to remove his quills and use them as blades to defend himself. He has Vague Memories of his childhood friend on the other side of the barrier he called her "Nabi" as a child.

As fate would have it Eggman-Nega in his attempts to outdo his grandfather had been digging beneath the surface of the Earth, and at some point Eggman Nega stumbled into the city Blight had been chosen to protect, this caused a huge cave-in. The cave in caused the Altar which sealed the 7 Order Pearls to be shifted revealing it's location, after this happened Blight rushed towards the Altar only to watch Eggman-Nega Steal them away. Blight refused to stay and watch him get away he boarded Eggman-Nega's fleeing Ship. As Blight Reached The Surface he became slightly startled to see a young fox and a hedgehog flying a ship. This encounter was an unpleasant one as the duo mistook Blight for one of Eggman-Nega's henchmen, seeing the mistrust between them the Doctor Ordered Blight to Defeat them and knocked him onto their plane. Feeling the only way he could get his Pearls back was to obey the Doctor's orders he Drew his Quills, this gave Sonic no choice but to engage him. Tails pulled the Plane close to the Radical highway and Sonic Knocked Blight to the ground. This was only the Beginning....

Blight has recently made two female partners who both seem to desire his attention, Crystal the sister of his old comrade Shard and a very familiar friend from his past Nabirei The Porcupine. They are Part of a team called "Team Royal" Nabirei is the Sapphire Queen(Flying Type), Crystal is the White Diamond Queen(Power Type), and Blight is The Silver Jack(Speed Type). Each of them reacts to the current 3 different power stones, Blight the Order Pearls, Crystal the Chaos Emeralds and Nabirei the Sol Emeralds. The group are a special task force they only show up when Sonic and company are in "deep water". For the most part they lay low in present day.

Blight tends to be very serious at most times, however once in a while he becomes very shy and childish. He enjoys the front lines due to his life being isolated, so at first the signs of trouble he is the most anxious. Blight can be very ill tempered but also very kind hearted. He is known to be oblivious to most people's subtle hints (I.E. Nabirei and Crystal). When he gathers all 7 Order Pearls at night he becomes Hyper Blight Wraith form (H.B.W. for short.)

Blight can drain energy attacks of many types, as well as the very life energy of his foes. Being aware of how great this power is he only uses it when he is sure that the foe is intent on harming him. The first person who experienced this ability in the main sonic cast is of course Shadow (We know he loves his chaos control don't we?). Blight also being the guardian of the Order Pearls is able to use their power in his unique way; "Order Shift" Silver Vortex(Silver Vortex, is an ability which pulls in foes then drains their energy.)

Life Spark: Blight Puts his hand beside his head across his Chest like an "X" shape,(not touching his eye like the berserk use of it) he then Puts his hands swiftly to his sides and the Glyphs in his hands open and he Lets out the Light from within him any foe it touches Has a large portion of their power stolen weak foes are instantly destroyed. Any Strong foe hit with it becomes dizzy.

Blight has taken me about 2 years to fully set up how he functions and setup weaknesses and strengths properly. Blight was originally a Hybrid Type who had ample Speed yet also had decent Power, so for a while I labeled him a Speed/Power Type. Blight Also had the latent ability to drain other character's Elemental abilities if timed correctly and use them as his own(I was a huge fan of Emerl I still am lolz.), My baby brother told me he was in his opinion "Overpowered". The reasons for this claim he stated were; 1. He could drain all 4 basic elements and use them as his own. 2. He also had a Super Form. and Finally He was not only a Power Type but also a Speed Type, and could Fly(Using Fire manipulation with air manipulation to make the air around him lighter than regular air by heating it.) After thinking for a few weeks I decided, why not set limits on his abilities? His elemental manipulations abilities would have 4 levels of filling with a gradual degeneration of stored element. This Seemed feasible for a long time. My brother still shook his head at me though, so I asked why is it bad now.? He said: He has all these powers here but still has that Super Form he really doesn't need all that power Sonic would get crushed by this easily. He was Right Oddly I felt, Blight's Super form can only be taken at night with 7 pearls, however during the daytime he is still dangerous you cannot really launch Chaos control elemental attacks of the 4 elements(Earth, Fire, Wind or Water). I decided at that point let's give up on the super form for now and instead give him minor upgrades in his short term elemental manipulations(Dividing his super form into 4 minor forms and when he gets all 7 Pearls his elemental powers are traded for The Singular Element "Luna"). The Minor Super Forms Were; Flare Mode, Tsunami Mode, Zephyr Mode and Gaia Mode. I only got around to drawing out "Flare Mode", When I got the current Idea, why not give Blight a more simple ability, Draining Energy, this Ability is the one listed above and in turn I could still keep the current profile of his Super Form; Luna Element, Wicked Swordplay like energy attacks with the Twin Crescent Moons, a nice Laser From the Marking on his head With The Crescents closing in for the "Final Cut"..... That is how Blight became who he is on this page now and for reading this long page of history on his design you have the understanding why I just mass uploaded all these pictures a few minutes ago, and quite possibly a headache lolz.

Shadow: So who's the Clown with the Blue streaks?

Blight: We'll see who looks like a fool when this is over...

Nix: Try not to get blown away my Spiky friend!

Blight: I'll take all you can throw at me and turn it right back at ya!

Retrieved from "https://sonicfanon.fandom.com/wiki/Blight_The_Porcupine?oldid=1801217"
Community content is available under CC-BY-SA unless otherwise noted.