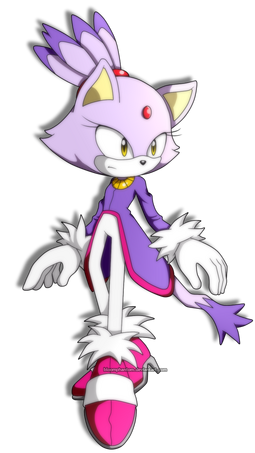 
Dr. Eggman
People who look at the Sol Emeralds the wrong way
Anyone who teases her about her powers
Being called "Highness"
Anyone who threatens her kingdom

Blaze the Cat is a character that appears in the Marshalia13 Universe. She is a mobian cat, princess, and guardian of the Sol Emeralds. She hails from the Sol Zone, where she battles robotic pirates and their fiendish master Dr. Eggman Nega, whose machinations have occasionally brought her into contact with the villainous Dr. Eggman and Sonic the Hedgehog.

Not much is known about Blaze's early life. She was born with the power of flames (aka pyrokinesis) and at some point was appointed as the guardian of the Sol Emeralds.

Not much is known about Blaze's early life. She was born with the power of flames (aka pyrokinesis) and at some point was appointed as the guardian of the Sol Emeralds.

At one point, Blaze's dimension and Sonic the Hedgehog's dimension were in flux with one another, allowing the characters to travel from one to the other through a tear in the space-time continuum. When Dr. Eggman came to her world and stole the Sol Emeralds, the Sol Emeralds summoned her through the space-time tear that led to Sonic's world, where she set about recovering the Emeralds. She eventually defeated Dr. Eggman, but she had to team up with Sonic to defeat the duo of Dr. Eggman and Dr. Eggman Nega, who were attempting to take over the universe. For the first time, she tapped into the power of the Sol Emeralds to transform into Burning Blaze, and she battled alongside Sonic, who tapped into the power of the Chaos Emeralds to transform into Super Sonic. After their victory and the tear in the space-time continuum was repaired, the heroes said their goodbyes, and Blaze returned to her world.

Blaze once again found herself up against a threat to her world, this time in the form of Captain Whisker, a robotic pirate, along with his crew (which included Mini & Mum, and Johnny) who planned to steal the mystical Jeweled Scepter, which was acclaimed to have the power to control Blaze's world's geological activities. While trying to protect the scepter, Blaze came across Sonic, Miles "Tails" Prower, and Marine the Raccoon, who Sonic and Tails initially met up with after the Tornado sent them to Blaze's world. Blaze once again collected the Sol Emeralds and defeated Captain Whisker and Johnny. After getting back the Jeweled Scepter, it was once again stolen, but this time by Dr. Eggman and Eggman Nega, who were working together to unleash the power of the Jeweled Scepter. Sonic and Blaze used the Chaos Emeralds and Sol Emeralds respectively to once again transform into Super Sonic and Burning Blaze and defeat Eggman and Eggman Nega. Afterwards, Tails made a ship to bring him and Sonic home. Sonic then left a Chaos Emerald for Blaze and promised to meet again one day.

Blaze and Marine would soon find Shadow the Hedgehog adrift at sea and help him to shore. They would later find Metal Sonic v3.3 attacking a city in search of the Zone's Dr. Robotnik. With the combined efforts of Blaze and Shadow, along with a well timed cannon blast from Marine, Metal Sonic was destroyed. Blaze then gave Shadow the Chaos Emerald that Sonic gave to her so that he could return home.

Blaze soon traveled to Sonic's World to find another Sol Emerald. She would find some unwanted assistance in Amy Rose, Cream the Rabbit, Cheese the Chao and Rouge the Bat. However, the latter would eventually betray her and attempt to take Emerald for herself alongside Team Dark. Though Shadow knew he was helped by Blaze before, he still came at odds with her and both sides fought for the Sol Emerald. The Emerald would eventually be hunted down by Team Hooligan and the Babylon Rogues as well. Eventually being able to defeat the Hooligans and the Babylon Rogues, Shadow allowed Blaze to take the Sol Emerald home for the sake of her world.

Normally cool and collected, Blaze gives the impression that she keeps a tight lid on her emotions, but this may not be her true nature. Despite her calm appearance she can lose her temper easily and when she does, she is quite scary to be around. Her temper also makes it more difficult for her to think clearly, leaving her prone to sneak attacks. While she may at times be tense, she usually remains at least polite; however, she tends to be distrustful of others, especially when the safety of the Sol Emeralds is involved. She dislikes being referred to by her title of "princess" and prefers just being called by her name. She often speaks her mind bluntly but feels grateful to those who have helped her and will do what she can in whatever way to fulfill the debt. She is also very dedicated to her duty as princess and does whatever she can to protect her people from outside threats. She also has a fondness of Marine, though often has her patience tried by her.

Much of Blaze's coldness comes from the distance that is enforced between others and herself due to her powers. She views her abilities as both a gift and a curse, and her disciplined nature may be due to her efforts to control them. Making friends like Sonic has helped her to become more relaxed and friendly, though any breach to her slowly developing trust is usually received harshly. Perhaps because threats to the Sol Emeralds are threats to the very survival of her world, Blaze holds little back in dealing with thieves, quickly expressing the possibility of employing lethal force. Under this hard exterior, however, Blaze conceals a fear of heights.

With the power of the Sol Emeralds, Blaze can achieve a super form and become Burning Blaze.  In this state, all of Blaze's abilities far surpasses her normal ones, and she is as well able to fly and is nearly invulnerable. Her pyrokinesis is also amplified, allowing her to shoot large fireballs. This form's main weakness is that it consumes a lot of Ring energy and needs Rings to be maintained.

Retrieved from "https://sonicfanon.fandom.com/wiki/Blaze_the_Cat_(Marshalia13%27s_Universe)?oldid=1821179"
Community content is available under CC-BY-SA unless otherwise noted.