Blaze the Cat is a violet and lavender anthropomorphic cat who is also a character from the canon series. 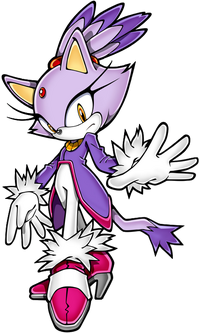 Anyone who is a threat to her friends

Prior to Sonic Fanfiction

Blaze had come from Silver's future, and followed him  because he was insecure when she was not around. After Silver attempts to seal Ibilis inside his soul, Blaze does so instead, and is sent to another dimension. Sometime before Sonic Fanfiction, Blaze had been sent back to Sonic's dimension in his time, in search of Silver.

Unable to locate him, she becomes worried about him, develops the habit of nervous eating. This became so much of a habit, she had started to become addicted to eating, and gaining a large amount of weight. She found that eating helped her take her mind off of Silver, and often used food as an escape from her worries. Unfortunately as a result, she had quickly become obese, and therefore lost most of her physical abilities, such as her agility and her cat-like reflexes.

When Zona had taken over, she was one of the few to escape, and be a part of the Living Colony.

So far, Blaze seems to generally retain the same personality as her counterpart, but there are some differences worth mentioning.

She is occasionally wary of people she does not know.

Her independence has sometimes lead her into dangerous situations.

She is generally polite to people, due to her royal upbringing, but it should be noted that sometimes, this may not be the case. So far, this has only been shown briefly in Chapter 1 of Sonic Fanfiction, when she snapped at Sonic for staring at her.

She is not quite as shy as she usually is, being comfortable around friends, but she is still wary of people she does not know.

She enjoys eating several various foods, and eating often, but doing so has caused her significant weight gain.

She is slightly less serious than her canon counterpart.

Similarities to the Canon Description

She still wears her red bindi and her red hair tie, which keeps her hair from falling into her face.

Differences from the Canon Description

In Sonic Fanfiction, Blaze has become morbidly obese. As a result, the clothes she usually wears no longer fit her. Instead, she wears a dark, short-sleeved, magenta shirt with dark tan pants, and red sneakers.

It is shown early on in Sonic Fanfiction that Blaze has become morbidly obese. This is because during her search for Silver, she developed the habit of nervous eating, which later developed into eating large amounts, often very quickly.  As a result, she is able to eat larger amounts of food, and much more quickly than the average person, without making herself sick.

Blaze is an acrophobic, meaning she is afraid of heights.

In Sonic Fanfiction, her obesity makes her weak, and unable to move as quickly as she did when she maintained a normal weight.

Retrieved from "https://sonicfanon.fandom.com/wiki/Blaze_the_Cat_(IncaIceBunny%27s_Universe)?oldid=1838138"
Community content is available under CC-BY-SA unless otherwise noted.