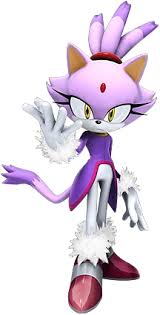 keeping the Sol Emeralds safe, having at least one friend
Dislikes
Heights,

people thinking about doing anything wrong with the Sol Emeralds,

being teased for being pyrokinetic,

They dare challenge us? Then they too shall know the true power of the flame!

Blaze the Cat is a princess from the Sol Dimension and the guardian of the Sol Emeralds. Because of her devotion to duty, she is not part of the Knothole Freedom Fighters, but she has assisted them occasionally. She is exactly like her canon counterpart. For more firepower, click here.

Born into a royal family, Princess Blaze came to be the guardian of the Sol Emeralds because the legends said that the role would be passed down to the closest living descendant of the first king. Naturally, Blaze was a descendant. She didn’t want this job, but she accepted it with grace and dignity. However, the immense responsibility caused her to become withdrawn, just like Knuckles. After the events of Sonic Rush, a goof-up in the space-time continuum caused by the split of Solaris sent Blaze 200 years into the future, where she met Silver.

Blaze's personality hasn't changed much. While she is a bit more open & friendly, she only acts that way towards her friends, as she distrusts strangers very much.

Nothing to say here.

Blaze still has all those hot pyrokinetic abilities of hers. Although not shown, she excels at certain sports in this universe.

Due to her pyrokinesis, fire is Blaze's weapon.

Blaze comes to the Great Forest to inform Knuckles about the theft of two Sol Emeralds. Rouge offers to help, but Blaze declines. Knuckles tells Blaze to go to Dr. Robotnik's HQ in Eggopolis, so she gets on her way. In Eggopolis, she makes it to Robotnik's lair without being seen, but she is captured when she attempts to recover the missing Sol Emeralds. Luckily for Blaze, Knuckles & Silver show up to rescue her before she's roboticized. Now free, she recovers the Sol Emeralds and destroys the IDMRD before returning to the Sol Dimension.

Later in the story, Blaze is summoned back to Sonic's dimension after Shadow drops a Chaos Emerald while trying to use Chaos Control. Here, she encounters Ogorki, who has turned into the fire-breathing dragon Gurkon. Using the power of the Sol Emeralds, she turns into Burning Blaze, and with the assistance of Shadow, she defeats Gurkon and toasts a bunch of stealthbots before returning to the Sol Dimension.

Having heard about Sonic's birthday, Blaze travels to his dimension to give him a gift. At first, she's concerned about the Blue Blur's suspicious behavior, not knowing about the odd presents he's been subjected to. Fortunately, Sonic accepts her gift, which is a music box that plays the "Star Light Zone" music from Sonic 1. After receiving thanks from him, Blaze goes back home.

Retrieved from "https://sonicfanon.fandom.com/wiki/Blaze_the_Cat_(BearfootTruck%27s_Universe)?oldid=1405033"
Community content is available under CC-BY-SA unless otherwise noted.