Start a Wiki
Blaze the Cat 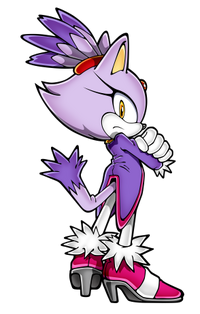 Blaze is a Solian cat that appears in various of TomFeatherhill's stories - a great example being I miss you and Secrets Revealed. Being an actual princess within the games Tom had an interest in her story. Blaze is one of the few characters to have a back story and an ongoing story about her - much of it inspired by the book Misery, various comic characters and the Silvaze pictures in deviantArt.

She is the Princess of the The Kingdom of Sol - although she gets exiled by Eggman Nega, who then gets defeated by her.

Blaze appears as a cat with purple fur and a white muzzle. The cat has a pony tail, holding her hair up. According to the Sonic New Network, that Blaze was wearing a shalwar and a mid-riff top, to depict her as an Arab like character.

Blaze is depicted as an intrapersonal individual. This personality was shaped by the way she was kept within the palace walls. However, when she meets Silver, she learns how to have friends and that there will always be a friend looking out for her.

Blaze, otherwise, is depicted as a well-mannered yet strict person.

Blaze was born to the King and Queen of Sol (future Eurasian superstate), with the power of manipulating temperatures and heat. Her parents disliked this power that their child had. They believed that it would only help destroy their balanced kingdom.

The Divorce of the King and Queen

Because of Blaze and various reasons, the King divorced with Queen. Blaze remembers this moment very well, since the King pushed her away when she was saying goodbye. This moment scarred Blaze for life, affecting her every time she thinks about it.

For the rest of Blaze' life, she had to live inside the palace, to avoid hammock in the city. However, she is allowed out when the Sol Emeralds are taken away. She couldn't have met anyone else, being lonely at the start.

Her mother, discovering this, asked the young knight, Silver, to accompany her. He had so many similarities with her and characteristics that would benefit her, like the fact that he had powers and a interpersonal personality. Almost immediately, they became friends.

Blaze woke up to discover that it was 10:00 in the morning and that her mother hadn't woken her yet. She ran down the stairs, to find the news people, talking to the guards and maids. She discovered that her mother died of Cardiac Arrest - a heart attack.

Silver, who was deeply saddened, mentioned that she would be missed.

Coronation of Blaze and Anti-monarchists

Blaze was crowned Princess of the Kingdom of Sol. This was when various anti-monarchist campaigns showed up at the front of the church. Police force, led by Silver regulated the area, stopping any protester into the church. It wasn't until an hour later that it was safe to exit the building.

Many argue that monarchism should be abolished in favour for a republic.

Blaze runs away and gets kidnapped by notorious war criminal, Dr Eggman Nega. He sends an actor to act and run as president for him. This was the start of the new Republic of Sol. However, the Republic only turns into a part of Robotnikland.

Blaze gets inserted a disease called NIDS, in order to bribe Silver for the Chaos and Sol emeralds.

The Fall of the Kingdom to Space Civilisation Gabado

Eggman Nega soon is revealed to have had an agreement with Anar, a human from another dimension - one with money. However, instead of giving the man the pay, she killed Eggman Nega and declared Robotnikland hers. She decides to push already dying Blaze into an ocean in the past, a cage that Anar deems unbreakable. This was when Blaze meets Sonic, mistaking him for Silver.

The Retake of Kingdom of Sol

It is clear that Blaze and Silver are best friends within this continuity. She befriends him in a young age and stuck with him for a long time. Blaze would be terrified seeing Silver hurt. However, if she mishears or takes anything that Silver says wrong, she'd go off about it.

Sonic took care of Blaze was sick and helped her live in the original timeline. He understood Blaze, although he made fun of her at times. Blaze treats Sonic as a joke at times but otherwise, she takes him seriously.

Retrieved from "https://sonicfanon.fandom.com/wiki/Blaze_the_Cat/TomFeatherhill%27s_continuity?oldid=1540678"
Community content is available under CC-BY-SA unless otherwise noted.