Pianoteen, the author of Blaze the Cat/Darkest Shadow's Universe, considers this page to be unfinished. As such, some sections may change. 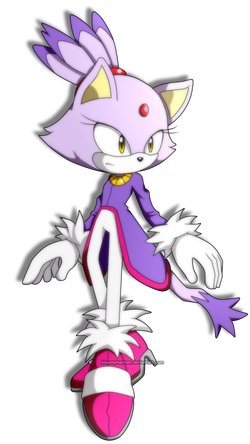 Blaze the Cat is a fictional anthropomorfic cat created by Sega. She is a cat from the Sol Dimension, who was then sucked out and taken to Mobius. She is the girlfriend of Sonic the Hedgehog and the older sister of Delila the HedgeCat.

Blaze was born in the Sol Dimension from the king and queen of the Sol Dimension. Being the newborn princess, she was very liked and popular around her subjects. She'd lie down on her royal throne on her mother's lap.

Later on, her parents had to move out to give birth to the second princess. So Blaze was left in charge. Being given orders wasn't very easy. Others felt embarrassed for getting orders from a 2-year-old.

Later on, Blaze was sucked out of the Sol Dimension and sent to an island off-shore. She also met a chiper girl named Marine. The two became good friends, but Marine sometimes started to annoy her.

Two years later, Blaze found out that Southern Island, her home, is where her sister was born. Blaze quickly ran to her parent's "house" to see her baby sister. Her name was Delila.

A year later, her parents died from the hands of Eggman Nega, and Captain Whiskers. Blaze was heartbroken. To protect her little sister from being massacred, she sent her far away from the Sol Dimension.

Blaze was then sent over to Mobius to attend school in the town. During her moving, Marine said her goodbye, but they would see each other soon. Blaze finally arrived at Mobius and met her first friend, Silver. The two became really good friends.

In Middle School, Blaze met a boy named Sonic. Both of them were oddly fast, and they'd battle each other. Then, Blaze started to have a crush on him. She would follow him around, ask him questions, and blush everytime he complements her. She also stood up to a young rabbit named Cream. A bunch of bullies were picking on Cream, so Blaze scared them of with her pyrokinesis.

A year later, Blaze and Sonic started to date. That's when she met Amy. The two didn't really seem to like each other very much. She also started to receive high grades. Once or twice a few months, she visits her sister to check on her.

Blaze discovered her special ballet talent at this time too. Everyone was asking her to become a ballerina. Also, everyone started to doubt she was a princess, so she lost her title for a while. From there, her life was straight forward.

Blaze is very calm, and princess like. Her disipline is a bit more strict than most children's though. She would act very elegant to show off her princess-like manner. At a fancy occassion, she would do her best to be the best she could be. Her calmness makes her very quiet sometimes.

Being a guardian of the Sol Emeralds, Blaze is very serious and strong-hearted. She would protect them and even execute whoever touches them. If somebody tried to touch her emeralds, she'd be raged and quickly get it back.

Despite her calmness, Blaze happens to be quite talkative usually. She's a bit overprotective of Sonic, and hates it when her friends. She could also be quite stubborn and act rude to the ones she is jealous of.

Volleyball- Blaze is very skilled at Volleyball. She isn't the captain of her team, but she could make very good blocks and bumps.

Gymnastics- Blaze is also very good at gymnastics. She was taught how to do these tricks from Delila. Later on, she took advantage of these skills and put them into combat and show. She is almost like an acrobatic expert as of now.

Yoga- Blaze happens to be very good at Yoga. She is very flexible and can make somewhat scary poses. She has done this for a long time.

Ice Skating- Being a rival of Louis, Blaze has shown to be an excellent ice skater. She isn't very fast on ice, but she's fast enough to win a ribbon. Her moves are very graceful to breeze through the first round of a contest. She has already won five ribbons and competed in the Grand Festival.

Ballet Dancing- Blaze is also somewhat good at ballet. Everyone asks her if she is a ballerina all the time, but she seems to stand out. Her moves are elegant and she twirls more than usual ballerinas.

Fire Manipulation/Pyrokinesis- Blaze's one and only elemental ability is fire manipulation. She could make flames come out of her hand and make fires rise from the ground. She sometimes competes with her sister to see who can manipulate it better. Her fire can actually run along against water instead of being put out.

Superspeed- Blaze seems to be oddly fast. She can run at high speeds, that definitely outmatch her little sister. This makes it easy to catch jewel theives trying to snatch Sol Emeralds. She also tries to race and get things done quickly by doing this.

Levitation- Blaze can also levitate in the air. She sometimes meditates and rises up in the air, which sometimes even scares others. She can also double jump. She often does this to grab things from a tree.

"I am Princess Blaze. Bow down before me!"

"Refrain from touching the Sol Emeralds, and you'll be safe."

"Wow, you're not as pretty as everyone said.."

"This ribbon is going to be mine."

"Guarding the Sol Emeralds is a tough job."

"Oh please, Delila, if we traded lives, you'd face the pain and hard work I go through everyday."

"I love this dress! Thank you."

"Please accept this gift, I want you to have it."

Delila is Blaze's younger sister. Blaze would usually fly down to Beach Cove City to see how she's doing. The two are always suprised to see each other. They would always compete against each other to see how they've grown stronger. They also do many fun things together as sisters. Blaze would sometimes brag about being the older sibling.

Sonic is Blaze's boyfriend. The two love to spend time and talk together, and they'd go into racing and combat fights for fun.

Marine and Blaze have been friends for a long time. Ever since Blaze was sucked into Southern Island, Marine became her first friend. They'd always spend time and talk.

"Wow, this must be an important moment for you."

Silver and Blaze are almost like siblings. They've known each other for quite a long time and been best buds ever since. Blaze always helped him out through troubled times, like older sisters would do to their young siblings.

"And just what do you think you're doing?"

Amy and Blaze aren't the really best of friends. She would sometimes catch her flirting with Sonic, and get really angry with it. In other cases, they are just friends.

"If you want an emerald, then just get your own."

Rouge and Blaze don't really know each other. She would just tell her not to touch her emeralds.

"Your designs are amazing!"

Angelina and Blaze are good friends. They spend time together when they're free. Usually, Angelina would create designs and outfits for Blaze.

Alexis and Blaze don't really know each other. Apparently, Blaze is a huge fan of her music. She bought almost all of her albums.

Christina is Blaze's enemy. However, Christina finds her a friend. Personally, Blaze hates her designs and admits that she's a bad singer and she'll become a slut if she keeps it up.

"You gotta have some real guts to beat me."

Louis and Blaze don't really know each other. They are rivals in ice skating, and always compete against each other.

Retrieved from "https://sonicfanon.fandom.com/wiki/Blaze_the_Cat/Darkest_Shadow%27s_Universe?oldid=1780503"
Community content is available under CC-BY-SA unless otherwise noted.