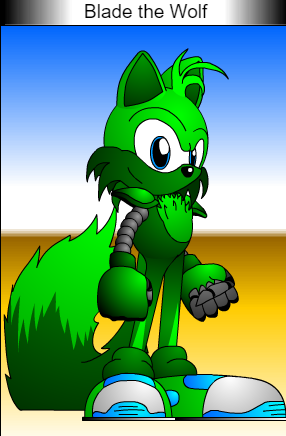 Blade the Wolf is an original character to be used with Sonic: Mega Drive Reborn as an ally to Sonic and company. He was born in Green Seaside Zone, one of the Eastwatch Islands.

He's a green wolf with cybernetic arms from an attempted roboticization, cyan eyes, and streaks on his legs. He also wears green-white-cyan tennis shoes with dark green cuffs. He is also age 15, making him older than the classic characters, and he's also 4'5" tall and weighs in at 139 lb.

Blade has a heart of justice, as he's been a solitary freedom fighter for three month before the events of Sonic: Mega Drive Reborn. He is also loyal to his comrades.

Three months before the events of Sonic: Mega Drive Reborn, Blade was running in his home island of Green Seaside Zone, when he noticed that something was completely amiss, as the local Mobini had disappeared. When he went to investigate, he was suddenly ambushed by Dr. Eggman and his army of Badniks, and later taken to his new base, Aquatic Base Zone, where Blade was to be roboticized to do his bidding. When Eggman first zapped his arms with the roboticizer to show his captive the effects, Blade took advantage of the fact that the roboticized arms gives him super strength, and broke free from his captor, and escaped Aquatic Base Zone.

Once he returned to his workshop in Green Seaside Zone, he started working on his cybernetic arms to give him some new gear, including a map of the Eastwatch Islands, and an arm-mounted sword that he calls the Cyber Blade.

Blade was born with some super speed, which allows him to run fast; not as fast as Sonic the Hedgehog himself, though. In addition to this, he also bears some super strength, thanks to his cybernetic arms, which boosts his strength to just under that of Knuckles the Echidna.

Blade is capable of performing a Spin Dash, however, thanks to his Cyber Blade, he's capable of two new abilities.

The Tornado Slash is where he charges up his power, and later unleashes a spinning tornado of Badnik-cutting strikes.

The Air Slash allows him to dash in any direction in a straight line, cutting up any Badniks in the way. If he happens to hit a Badnik at the end of the move's path, he can connect it with another Air Slash, allowing him to get to places others couldn't.

Before his arms were roboticized, Blade was a pure swordsman, and he has won a couple of duels. Thanks to the increased power provided by his cybernetic arms, he's incorporated some hand-to-hand in his move-set.

Because Blade is also a mechanic, he was also able to install a mini-map and a beam sword into his cybernetic arms.

His speed isn't as great as Sonic's, so don't expect him to pass the Blue Blur anytime soon.

Also, his Cybernetic arms has had a history of breaking down, locking away access to his upgrades.

Retrieved from "https://sonicfanon.fandom.com/wiki/Blade_the_Wolf?oldid=1828373"
Community content is available under CC-BY-SA unless otherwise noted.