Yeah! I'll make sure to remember that one - at least until I get a new, sharp knife!

Blade is a part of Team Kinetix. She and the Kinetix belong to me.

Blade the Fox has tannish-brown fur and a muzzle similar to Fiona Fox from the Archie Comics, her grandmother. She has jet-black hair designed like Princess Alicia Acorn, or anti-Sally. Her eyes are dark-brown. She has a choker necklace with the gemstone that Silver the Hedgehog has under the cuff of his boot. Blade also wears a casual, v-necked tee with a golden star in the middle, and black sweatpants. Under her shirt is an uns

een sheath for her knives. She cut her grandmother's original, fingerless gloves to the wrists. Her shoes are white with a blue strap that has dots. Her location varies the color of her shoes because they were made in her home world, Chaos Zone Prime. Blade's Chaos Armor was also made in the Chaos Zone and is shown on the left. Before the Ultimate Chaos War, all Chaos Zone Prime's citizens' Armor were light blue. Now, afterward, they are black.

Blade is serious and likes to get her goals done. Her friends tell her to relax, but, as one of her many flaws, she finds that hard to do. When people tell her she isn't doing something right, she gets extremely defensive. She often thinks that people believe she can't take care of herself, which infuriates her. Usually when people meet her, they are reluctant and try to avoid her, but in the end they are fine with her and actually come to her for help.

Blade was born in Chaos Zone Prime, quickly "abandoned" by her unknown parents, who were later thought to be killed. She was found and taken to the orphanage where she taught herself self-defense and independence. In 1st grade, she met a 2nd grader named Dominic the Bat. She laughed at his ridiculous name but he told her that he was told it was for a special, unknown reason. It turned out he was an orphan, too, at a different orphanage. Unlike her though, he didn't have Chaotic Abilities, so he had to wear special boots to keep him from falling through the cloudy city. When she saved him from that, they became best friends. One day the mysterious creature Iblis came destroying the city and many citizens, starting the Ultimate Chaos War. Blade and dominic quickly escaped, only for the bat to be stolen off by Iblis's minions. Blade found her way to another zone only to be snatched off by Blaze and Silver who were looking for others with kinetic abilities. Along the way, the recruited K.A.N.I., Shock, Aqua, Tide, and the  eventually found Dominic too. Later, Silver left to save the future (since the team members were the only living things there) and Blaze went to find the Sol emeralds, leaving the six behind. After a year alone, the team came across about 30 teenagers with kinetic abilities, but weren't as trained as the six. Soon, the six became the "grandmasters" of the students, K.A.N.I. teaching electrokinesis, Shock and Dominic teaching aerokinesis, Aqua and Tide teaching hydrokinesis, and Blade teaching geokinesis. When Blaze and Silver returned from their missions, they became the grandmasters of pyrokinesis and psychokinesis. currently, new students from many zones and timelines come to be taught at the academy.

Blade has the power of geokinesis, also called the power of earth. She can move rocks around just by snapping her fingers. As a geokinetic, Blade is supposed to be strong, like earth. Instead, Blade is flexible and can do many flips and such. This is very deceiving to her apponents because when they see her flip they are in a moment of shock. Most geokinetics don't's have this ability. However, it is unfortunate that Blade isn't strong. After knowing Blade, she is easily defeated because she is nowhere near strong. In fact, she is leaning towards the weak end of the scale. The only reason she isn't a complete weakling is because she needs strength to get momentum for flips. Especially other geokinetics can defeat her because not only are they strong, they are like, REALLY strong. Blade is very lucky that most geokinetics like her. This fox also has Chaos Control. Artificial Chaos Control, that is. Blade has to take special meds to have chaos Control. It took her a while to figure out that the only reason she had it in the first place was because Chaos chemicals were injected in her so that she could live in Chaos Zone Prime. after 13 years, though, it started draining out of her, and she completely lost it in the middle of a life-or-death battle.

Blade, as said, is an amazing gymnast. She is self-taught and majorly inspired by Dominic. She puts a ton of her tricks into fighting, generating power in moves such as flip-back kicks. On the contrary, her special moves can result in downfall. A smart opponent could see a flip coming from a mile away and use it to their advantage. K.A.N.I. and Poisonberry are the only two she knows that will do that. However, K.A.N.I. isn't one of her rivals because they're on the same team. Poisonberry will take any chance she can get to do this to Blade, considering that they are rivals.

Blade is very defensive, and takes many things as an insult. She can be very mean, and hurts her relationships with others often. Also, she is waaay to serious sometimes and doesn't like seeing people get ahead of her or breaking her rules. Basically, she wants to be in charge, but is still too naïve. A lot of the time, she thinks she can take on challenges that get her beaten up. A couple times she took on a few 18 year olds and almost ended up dead.

"Nobody's getting past me!"

"See you at the finish line, losers!"

"And they call you racers!"

"Yeah, so, I finished, ate dinner, took a nap, and went to congratulate the 2nd place winner right as they came in."

"Another day, another win!"

"Are you kidding me? Give me a BREAK!"

"I just LET them win, have their single moment of glory!"

"It'll take more than you and your sad team to beat half of me!"

"I see you've set aside your time to be humiliated and beaten up by a 13 year old girl!"

"You REALLY need something original. I mean, I taught my grandad these moves in two days!" 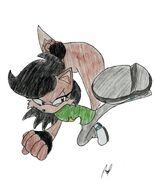 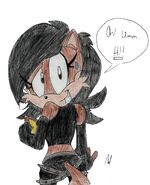 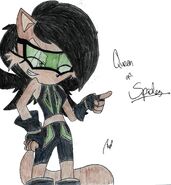 Blade the Fox as a Secret Freedom Fighter

Blade as a prelate 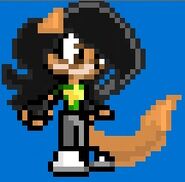 Sprite of Blade the Fox
Add a photo to this gallery

Retrieved from "https://sonicfanon.fandom.com/wiki/Blade_the_Fox?oldid=1535973"
Community content is available under CC-BY-SA unless otherwise noted.