Tiger Lily (known by her stage name Black Rose) was a main character who was supposed to appear in Sonic the Hedgehog: Crystals of Soleanna, but never made it into the final version.

Black has emo/goth fashion. She has dark raspberry fur with a square-shaped bobcut hair, tan skin, red-pink lips and brown eyes. She wears a moderate purple French hat with a pink heart on it that covers her ears and wears violet glasses. She also wears a white shirt covered by a black-grey strapless dress and pink socks with brown shoes. She also wears moderate green fingerless gloves.

Black Rose is a calm, kindhearted, shy and cheerful girl who doesn't like to hurt innocent people. She is also artistic and likes to paint, draw and take pictures. However, whenever she thinks about her parents' fate, her mood changes to a cold and depressed one, and often spends her time in a dark room (which she calls the "Confessing Dimension").

Born and raised in Mobius, Tiger Lily and her family were rich nobles who lived in a large mansion until they got into an accident that killed her parents when she was five. At the same age, she began burning the house down and ran far away to the trees, where she was sitting crying until somebody followed her into an another place of Mobius. As a pre-teen, she decided to become an artist and started her career by drawing and painting (including taking photos). In her current teen years, she ended her artist career and started to become a fashion designer to found up "Team Fabulous".

Black uses her paintbrush as a weapon to hit the enemies with it with the colours from the paintbrush. Also has the ability to run at a fast speed, superhuman-strength, shapeshifting, wall-jumping, ect. She can manipulate earth, as plants and flowers attacking the enemy.

Black Rose has a fear of snails. And whenever she sees them, she starts screaming her head off.

Some years ago, I watched various episodes of Sonic X (both English and Japanese) on YouTube. I then got the idea to make my first character, which she was originally supposed to be a cheetah. I changed her design and name multiple times until she was supposed to be a ladybug/ladybird called "Cherry Pop". I scrapped the idea I made, and I named her for "Tiger Lily", Black Rose's birth name. Then later, I came up with the name "Black Rose". This is how the evolution of her concept was made. 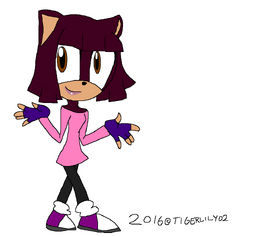 Retrieved from "https://sonicfanon.fandom.com/wiki/Black_Rose?oldid=1661435"
Community content is available under CC-BY-SA unless otherwise noted.