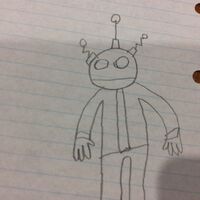 Bionic is an android originally created by Professor Weilson, and was previously proposed to destroy all humans on earth. However, a slight programming mistake made Bionic's purpose to destroy literally every human on earth, including Weilson. He was later neutralised by Bessie, a girl who is a big fan of the Sonic series.

Bionic wears a black leather jacket along with white gloves and T Shirt. He also wears black pants with matching shoes, and has three antennas which are used to keep him alive.

In 1931, After Professor Weilson's old Robots were destroyed by police, he decided to make a bulletproof robot that was nearly indestructible. So he used up old scrap metal from his other robots and created Bionic. At first all was going well for Weilson, until one fateful day when he made an uncoverable error, which caused Bionic to shoot and kill Weilson.

68 years after Bionic rebelled against Weilson, he still was gonna destroy all humans on earth. But while he was walking down the street searching for new victims, he was taken by a 15 year old Bessie and reprogrammed. After four hard weeks of work in the lab, Bionic was fully repurposed to defend humans from all evil.

Bionic is a quiet and good guy, although he can snap if offended enough. His interests usually include riding on roller coasters and eating Banana split sundaes.

Retrieved from "https://sonicfanon.fandom.com/wiki/Bionic?oldid=1800452"
Community content is available under CC-BY-SA unless otherwise noted.