Big the Cat is a large, anthropomorphic cat who is also from the canon series. He is a skilled fisherman who lives in the jungle with his best friend, Froggy. 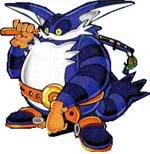 Very little is known of Big's early life, though at one point, Froggy had run off, which eventually led to him to meet Sonic and co. He sometimes helps out on their adventures, though he usually just stays in the jungle with his best friend, Froggy. It seemed usually Froggy getting lost is what leads Big to go on adventures with his friends.

Prior to Sonic Fanfiction

At some point, Vanilla had hired Big to tell stories about his adventures, whether they were with Froggy or with his friends, to the children who would come to the sweet shop. It also seems that he inspired Cream's family to come up with the idea of Fish Cakes. (However, it should be noted that there is no fish in them, they are just cupcakes shaped like fish)

Big works at the Sweet Shop, along with Cream's family, telling stories to the children who come into the sweet shop, while either waiting for their goodies to be made, or while they are eating them. When he isn't at the Sweet Shop, he is most likely working as a fisherman.

Since Big has made no formal appearances in IncaIceBunny's Fanfictions yet, it is still difficult to determine if he has any personality differences from his canon counterpart or not. If he does, they have yet to be shown.

Big has superhuman strength, being able to lift up heavy objects with little to no effort.

He is a skilled fisherman, even having his own business off to the side.

He is usually immune to poison and electrical shocks

Retrieved from "https://sonicfanon.fandom.com/wiki/Big_the_Cat_(IncaIceBunny%27s_Universe)?oldid=1838137"
Community content is available under CC-BY-SA unless otherwise noted.