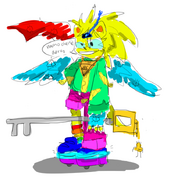 Add a photo to this gallery
|200px|center|

Beyblade the Platypus is a neon-yellow hedgehog with blue eyes and wings. He has two pairs of wings, except one pair (the demon pair) is only half, because one was lost in Da War. He also lost most of his pink jeans in Da War as well. He we

ars blue fingerless gloves, and his aesthetic is eyes. He wears blue moonshoes with purple platforms that let him jump super high wee! Also he has a third eye above his two eyes that he can channel his aura into to make it glow. He lost his bill in Da War.

Beyblade is kind, romantic, and very skilled in the art of Letting Them Rip. He cares about two things, his Bey, and his Blade. He really likes Nacho Cheese Doritos and he gets it on his mouth a lot. He doesn't it like it when people make fun of his hair and thus will fly into rage when someone make fun of it.

in the year 1923 A.D., Shadow the Hedgehog met Freddy the Merc. They fell in love and started a long family tree of Platypus-Shadow hybrids. Beyblade is part of this proud lineage, and from a young age displayed great power and coolness. At age 1, he learned to speak Swahili fluently. at age 1 and 1/2, his great great grandfather Shadow introduced him to the art of Letting it Rip. From then on, Beyblade was the never same.

He soon acquired several things: his keyblade (inherited from the Master of Masters himself), his Dorito powers, his wings (both of them), and his moonshoes. His zippers are made of pure cheddar.

Dorito Power: Reality bending powers he got from the Dorito from that one show on TV

Keyblade: He played Kingdom Hearts until the characters came to life and he got his keyblade.

Flight: He has two and a half wings that let him fly, slightly veering to the right.

Moonshoes: He can run, he can jump, he can dance and sing, believe in yourself and do anything.

Millenium puzzle: He stole it.

Dream powers: if you believe in him, he appears in your sleep.

Insomnia powers: He can make you not sleep so you're forced to stare at him.

Sleep paralysis: He lets it rip and you can't fall asleep.

He can let it rip twice in the same turn. It takes peoples souls when he does it.

If you've had a good night rest, he can't touch you. Moral of the story: go to sleep.

Beyblade the Platypus
Add a photo to this gallery
Retrieved from "https://sonicfanon.fandom.com/wiki/Beyblade_the_Platypus?oldid=1874228"
Community content is available under CC-BY-SA unless otherwise noted.