Bermuda the Coyote is the brother of BlackFire Coyote and Kalta Coyote, as well as the cousin of Jaqueline Jackal.

Bermuda's life was quite different back then.

When he was younger (about 11-13), his personality was very different (though it can be said "normal", with good moments as well as bad). Though, he was a lot happier.

Then one day...one day would change that...

He started to act very strange one day. He stole sharp objects (such as knives), and pierced his wrists with them. His parents were devastated, as well as his brother and sister. Though, they thought this was part of every teen's life, though Bermuda's mom was thinking of an exorcism.

Later in that day, his appearance started to change also. His hair became longer and messier, and it covered his eyes. He also appeared to be taller, and his fingers inside his gloves looked slightly pointed. He asked to go take a walk, in which his parents responded, "yes".

A few hours after, Bermuda's parents began to worry, so they sent his brother to go find him.

What Blackfire discovered, shocked him...

Bermuda was standing in the middle of a field, a bomb tied around his chest. His appearance was even more different. He had a Crystalline look to him, and the whites of his eyes were purple. His fangs were also longer.

His brother watched in horror as the bomb blew up.

Severely burned, yet alive, Bermuda woke in the hospital. He felt somewhat "normal". The demon that was inside of him had left.

The thing is...Bermuda felt....different. He felt a swipe of rage, sadness, any emotion like that.

Ever since, he has felt those emotions, yet somewhere inside, he was the one he used to be.

Bermuda has a lonely and slightly sadistic personality. It is known that he is emo. He usually always feels left out (and really always has been), and he usually curses people (not curses like "curse words", I mean that he tries to inflict a curse on someone) when they ignore him, or tease him.

Despite this, his other personality is quite joyful, in a violent way.

He states that "he is just happy he has at least a few friends, because he knows he will not make any new ones".

Bermuda doesn't have any special powers (such as Kinetic or Mancy powers), but he has very great senses, and skills with weapons.

He always carries some sort of dagger, and he can usually make it appear out of hammerspace, much like Amy can do with her Piko Piko Hammer. Also like Amy, Bermuda seems to have an unlimited amount of these daggers, and he can pull as many as he wants out of thin-air (again, which is Hammerspace).

He is a master in Hand-to-Hand Combat, and he knows various Martial Arts.

His Physical Features also help him in combat. If he is thrown on the ground, and the enemy is close by, he can use his tail to trip the enemy. His teeth are able to bite through strong metal (though it would be oh-so painful). Also-if he wanted to-he could use the gem in his collar, and pierce it into the enemy's skin.

He has the somewhat-strange ability to intimidate, or even paralyze his enemies with his glance.

He is quite sensitive (emotionally), and usually puts himself down because not many pay attention to him (which, makes him weak). He has a slight disliking for water, but this is because he really cant swim. He also portrays a certain rage towards cat-characters (which is a pun on him being in the Canine Family), though he is also slightly cautious towards cats, making him edgy.

Although not much of a weakness, he has a very big disliking to sunlight, mainly because he never goes outside much.

Something that is real sensitive to him, is the fact that when he is around most people, he causes them to have bad luck (though this can possibly be seen as an "advantage").

Welcome to My Life by Simple Plan

first picture, by me :D crap! he seems too emotionless XD 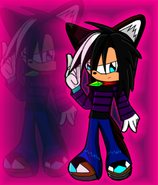 lol i made a DE of Gamer's pic

Bermuda as a Shadow Beast. credits go to Chembur!

half-assed picture XD
Add a photo to this gallery
Retrieved from "https://sonicfanon.fandom.com/wiki/Bermuda_Coyote?oldid=1579280"
Community content is available under CC-BY-SA unless otherwise noted.