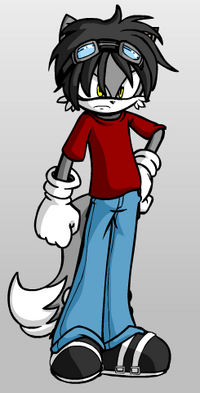 Beck is a Wolf born on Sylvan island. He is the brother of Nathan

Beck has a cold and serious personality, but he also has a fun personality sometimes. He can be quite helpful, as he gives his maximum potential on many occasions, and he also has some tips for battle or exploration. He likes inventing, though he dosen't makes it often.

Beck Backstory will be modified to combine with Nathan new backstory, which is in process.

Beck has made some items, and found some. Thes are the items he has and he got on his journey:

Sword
An iron sword Beck father made for him. It is made of iron, and he can combine his fire abilities with it.

Backpack
A backpack, it can carry a good amount of things.

Molten Comet
An Extreme Gear made of some pieces of Meteorite and Flareite. It's acceleration is medium-low, but it is quick, and can easily turn.

Section incomplete. Subject to change
Beck has many fire abilities he got from the Sylvan Core. He has learned these techniques:

Ember
A simple attack which involves throwing a flame.

FlameThrower
A stronger variant of Ember. Beck continually throws fire from his hands.

Fireball
Beck creates a fireball that he can throw. When flung at a high speed, it can gain speed until it colides with anything, generating a small explosion that causes high damage.

Flare Blitz
Beck charges at high speed while being covered on fire, tackling a target with high power. However, this also hurts Beck due to the strength of the tackle.

Flame Sword
While having his sword, he can combine his power with it to make his sword burn in flames, empowering it. Though it can be extinguished with any kind of water.

Fire Claws
Beck can use his fire energy on his hands to make fire claws. It can be useful when he loses his sword.

Fire Wings
Beck creates a pair of wings on his back. He can't do much with them, mostly glide and attack with them. He can also flap them while also using fire power to form a heat wave.

Fire Boost Beck boosts with his wings into a direction, flying a short distance. However, he flies fast, and can also use more fire power to strengthen the power. The direction can also be changed.

Fire Dragon
A stronger variant of Flamethrower. Beck fires a fire dragon from his hands, being able to chase enemies, dealing high damage. It consumes the most energy, but it deals the highest amount of damage from his attacks.

Beck has a high melee strength he got from training, so he can attack and defend well.

He also has somewhat high speed. He runned everyday while training.

His most basic skill is a roll, where he rolls with his arms extended and hands closed.

As he uses fire element, he can be found weak when against a water user. Though not being weak to electricity, he cannot protect well of it.

He can also be found somewhat slow attacking.

Retrieved from "https://sonicfanon.fandom.com/wiki/Beck_the_Wolf?oldid=1637666"
Community content is available under CC-BY-SA unless otherwise noted.