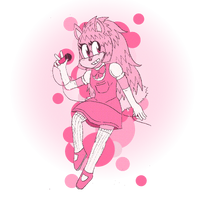 Bea is a lifelike android who resembles a pink fairy armadillo. She is pink and often wears pink and white, the colors associated with Dreams. Her fashion taste closely resembles trends often seen online. She has magenta eyes and her face is often stuck in the same toothy grin, regardless of her emotions. She doesn't blink much.

Bea is an extroverted individual and a shining beacon to the people of Alpha. She needs the company of people and longs to entertain. She's extremely charismatic and tends to behave in quite the flashy manner, going so far as to dance in the midst of combat- even if she's losing. She's loyal to Vega and will more likely than not do as she says. She has difficulty understanding others, but tries to be inspirational regardless.

Bea was created by the scientist and soon to be CEO, Vega Arcturus. After Dreams was founded, Bea soon became the "face" of Dreams, what with her endearing personality and overly cutesy appearance. This allowed the slightly more introverted Vega to focus more on her tech company instead of appealing to people. Bea found herself loving the spotlight and was quickly merchandised, getting her own fashion line, talk show, and even dating sim.

Unfortunately, Dreams had its... quirks. Despite all of the advances it brought to technology, Dreams began to corrupt as Vega began to use the corporation for her own gain and would make horrible sacrifices for progress. She began to dispose of politcal opponents, replace them with androids, and use the city of Megalopolis as her own testing ground. Bea was one of the very few to know of these things. Her confidant. Despite the weight of this information, Bea continued to smile and wave, put on shows... after all, Vega suceeding in her end goal would justify the means, correct?

Dreams's corruption was revealed and a team of heroes were to strike Dreams. Vega told the employees that they could choose to leave or to stand and fight. A few remained to fight, including Bea, who decided to host one last show. Under the blaring studio lights, Bea entered a fight with Hector, whom she lasered the foot off of. Hector eventually damaged the android to the point of emergency shutdown. She was later repaired by Vega, and ran the company while Vega was forced into community service.

When Vega returned, Bea was overjoyed. She didn't... exactly turn a new leaf, but she at least seemed to be playing a bit smarter and a little less violently. Bea took what she could get. Hey- why wouldn't she?

Lasers- Bea's hand can turn into a cannon, launching pink lasers at an opponent. They can deal serious damage.

Idol Mode- Going for an all-out offensive attacking style, Bea trades energy efficiency for pure offensive power. This will cause her to shut down shortly after and she will need to recharge.

Bea is a very agile and nimble bot, and is excellent at keeping her balance. She can dance and sing extremely well, and although she doesn't understand people very well on an emotional level, she is charismatic and easily worms her way into people's hearts.

Bea is breakable, and wasn't exactly intended to be a combat robot. Her defenses aren't the greatest. She's also easy to distract, especially due to her tendency to show off in battle. In addition, her power can drain quite easily if she does not focus on her power output.

Retrieved from "https://sonicfanon.fandom.com/wiki/Bea?oldid=1853080"
Community content is available under CC-BY-SA unless otherwise noted.