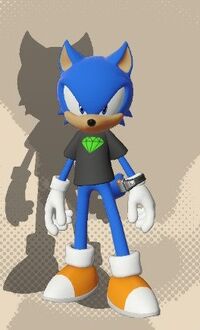 On the positive side, Baxter is a playful, boisterous and energetic fellow especially when he's with Sonic, Tails, Knuckles, Cream, and Rouge. On the negative side, he's a little sensitive and tends to blow up and his friends whenever they are fighting.

Born a young cub at Green Hill, Baxter was a little fireball of light that sooner grew up fighting alongside Sonic and his friends. At school, he was one of the most popular kids but not only he was popular but he was also caring of the un-popular. It didn't matter who he hangs out with as long as they accept them for who they are. From that time, His heart began to glow from the inside wich granted him super speed. While his Mom was out fetching food for the family, He and his dad have been training for whatever danger that Green hill may encounter. Day in and day out he would train by himself, with his siblings, or his dad and has become very strong over time. Months later, Baxter decided to leave the family house and live on his own. The family thought that he was willing to take care of himself and hoping that he will visit them again. He later met Sonic and Tails at the ocean palace (Sonic Heroes) to help ask for a new home until they went to the Sea Gate and then, Sonic and his pals along with Baxter helped him make his new home special.

A rare Golden Chaos Emerald that Baxter bonded to, gave him the power to morph into any Power Ranger that has ever existed. From Mighty Morphin to Beast Morphers.

Most people transform into werewolves when there is a full moon BUT NOT BAXTER. A black chaos emerald alows him to transform into a werewolf day or night with a whole bunch of new powers

Baxter is always confident when fighting alongside his pals but when his friends fight each other instead of the main problem, His fur color goes from blue to gray, his strength drains, and his heart begins to break