Batula is a character from IncaIceBunny's Fanfictions. He is the secret husband of Queen Aleena Hedgehog , and the father of Sonic, Sonia, and Manic. 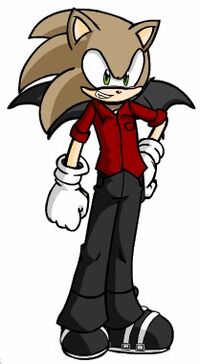 Anyone or anything that is a threat to Aleena, his children, or the kingdom

Not being able to be involved in his children's lives

Sunlight or Bright Lights (Either an annoyance or scares him, depending on how much light)
Romantic Interests
Queen Aleena (Wife)
Skills and Abilities
Skills
Flight

Mind-Control (to an extent and temporary)

Very little is known of Batula's early life though it is very likely he was raised in secret, (probably in the small castle he currently lives in), and away from the world, due to his family's bad reputation.

Prior to Queen Aleena's disappearance

Not long after Queen Aleena's coronation, presumably after her parents' deaths the two had encountered each other, became good friends, and eventually fell in love. Aleena and Batula had married in secret, and even though there were no legal documents, it was still considered legal as only those among the highest authority can grant this. Since Queen Aleena was the highest power in Mobius, she was able to do so.

Some time after, she was expecting their children, triplets, two boys and a girl. Batula told Aleena she should continue to keep their marriage a secret, and she agreed, not because she was afarid of him, but because she was afraid for him, thinking her people may try to harm or even kill him, due to the bad reputation his family had recieved over the years. Before they were born, Batula requested that one of his sons be named Oligvie, after one of his distant grandfathers.

After their children were born, one of his sons, Manic, had been born with bat wings. Aleena had brought him to his father in hopes he could fix it. Batula made a potion that removed Manic's wings painlessly, and turned him into a hedgehog, thus lowering the suspicions of their children's father.

Batula had a minimal role in his children's lives, due to the secret that he and Aleena agreed to keep. However, this did not stop him from watching his children play together from the shadows, where only Aleena could see him. He did at one point save his son, Oligvie, (who had recently gained the nickname "Sonic") from drowning in a river, when Aleena was trying to teach her children how to swim, and erased his memory afterwards, so he had no memory of who saved him, but it did leave him with a fear of water.

After years of watching the royal family's lives from the shadows, he began to grow wary of Joseph T. Marley , Queen Aleena's advisor. He tried to warn her of his corrupt intentions, though she often dismissed him because of her own trust in Joseph. Two weeks later, Joseph had announced to Mobius that the queen had gone missing, and that he would take over Mobius until her hopeful return, much to his horror and grief.

One year after his grandson, S.J. was born, Zona had taken reign over the throne, and he and his wife, Aleena, were killed in the process. His son, Sonic, had taken rule of the Living Colony since technically, he was next in line to the throne.

Batula makes his debut in Sonic Fanfiction, as Queen Aleena's secret husband, and the biological father of Sonic, Sonia and Manic.

Since Batula has made no formal appearances in IncaIceBunny's Fanfictions yet, it is difficult to determine his personality as of this moment. Judging from his history, however, he seems to be a bit reclusive and secretive, possibly meaning a lack of social skills. It also seems he cared for Aleena, as well as his children, despite that he was unable to be a part of thier lives.

Batula is a hedgehog-bat hybrid, known as a hedgebat, with faded brown fur, black bat wings, pale skin, and hazel-green eyes. He is 4'2" (127 cm), and his weight is currently unknown.

He wears a medium-sleeved dark red shirt, white gloves with sock-like cuffs, black pants, and black shoes. Sometimes, he wears a black hood that hides his face. He usually wears it when leaving the castle.

Being half bat, he is capable of flight.

Batula can fly at superspeeds, but it is currently unknown how fast he runs on foot. He also has fast reflexes to match his speed. It is possible that Sonic has inherited his speed and reflexes from him.

He also posesses superstrength, possibly where Sonia got hers from.

Batula is skilled in fencing, probably something he has learned from Aleena.

During a battle, he can bite an enemy on the neck. This does not turn them into a vampire, but paralyzes them. However, the effects are only temporary, and can last anywhere from a few moments to a few hours.

He seems to have knowledge of potion making, shown that he was able to remove Manic's bat wings when he was a baby.

Batula is capable of mind control and hypnosis, but similarly to his bites, the effects are only temporary.

So far, his only known weakness is bright light. He is not too fond of bright light, but he is usually not afraid of it. However, if bright lights come on or are revealed very quickly it may blind and/or frighten him. It does not seem to matter if it is sunlight, fire, or some other synthetic light.

Retrieved from "https://sonicfanon.fandom.com/wiki/Batula_the_Hedgebat?oldid=1795452"
Community content is available under CC-BY-SA unless otherwise noted.