This is an article about Baila; Goddess of the weather, a character created by Jaredthefox92 on 01/20/2015. 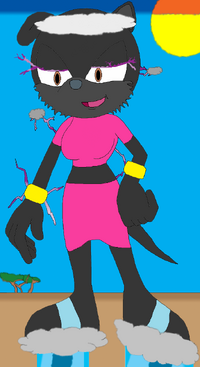 .Omnipotence (comes with being a goddess)

.Coldness and ice manipulation (she can even cause snowstorms with her breath!)

.Invisibility (sometimes she likes to hide the fact it is herself and can turn herself invisible while moving strong weather fronts.)

.Size manipulation (Because she needs to be high up to control the weather.)

.Levitation (She walks on clouds and even sleeps on formations of them.)

.She can control the weather via her mood (Lighting when angry, snow and blizzard when cold hearted, rain and normal showers when sad and depressed, clear skies when happy, tornadoes when envious. )

.Her appearance alters via her mood. (Sort of like a Castform from Pokemon.)

Personality: Baila is generally happy, jolly, and takes great pride in her job of controlling the weather thus allowing life to flourish. However she is known to be a tad moody.
Weaponry
Her powers.
Other Info

Baila; Goddess of the weather is a roleplaying character made by Jaredthefox92. As her title states she is Mobius's mistress of the weather. Her role is to maintain the balance of all things associated with the sky, thus allowing Mobius's ecosystem to continue and life on Mobius to exist. She takes her job very seriously and views herself vital for life on Mobius to thrive and flourish.While she is indeed a very friendly and emotional goddess, she is known to have tantrums that can have dire effects on those around her.

Baila is originaly believed to be one of the "Old Gods", or deities that been around since the Age of Man, or before the Day of Fury. She is believed to have been based off a human female form and interacted with mankind secretly for eons. Much long after the Age of Mobians came about she wished to interact with this new species of human hybrids so she wouldn't feel lonely now that the human population on Mobius has drastically dwindled. Thus Baila now is seen in her Mobian dog form.

One thing to take note about Baila is how strange her appearance is, even when she is in her "normal" form. Baila is a tall (for a female Mobian), canine Mobian with brown eyes and eye lashes that literally are tiny sparks of lighting. She has black fur and is known to literally to walk on two cloud like sandals as she hovers above the ground. She wears a simple long pink skirt with a matching top. The only traces of jewelry on her is two large golden bracelets found on her lower arms.

When in her deity form she is a titanic sized goddess who has her powers unleashed. Her eyes will burst with lighting and she wears a crown made of clouds upon her forehead.

Despite not participating in mortal matters Baila is actually quite friendly and approachable to mortals. She often tries to integrate herself into their society and learn their ways. However she has issues fitting in due to her having to control herself constantly and her "quirks", (such as her clouded sandals letting out rain constantly.) She adores most mortal life and is quite fond of the arts of dance and music. So much in fact that traditionally it has been possible to acquire badly needed rain in some regions of Mobius by appealing to her with "rain dancing".

"When I'm happy, you're happy! Well at least the conditions are favorable for a happy enviroment I suppose."- Baila being a weather nerd.

Baila is Mobius's goddess of the weather, and as such she has mastery over the elements involved with weather,(such as water,electricity, wind, and ice/snow), and basically dominance of the sky.Most of her powers comes from her job position as goddess of the weather and thus are either elemental in nature. She has other powers that help her with her task, such as the ability to change her size to become a titanic giantess, levitation, the ability to cloak herself (as to not be scene when she's shy), and of course the to be unhindered by her own powers.

While Baila is indeed an important goddess she has her own share of mortal character flaws, and issues. The primarly one is her losing her temper. While she is known to be more friendly and "down to earth" than other Mobian deities she still has her fault of unleashing powerful storms when agitated.Especially when mortals try to worship her other than by simple and pleasent dancing and/or music.Baila takes great offense to those who believe they can "control her" via kissing up to her. Often this will lead to her having tantrums that shake the very skies and bring wrath down upon those around her.

Baila also has issues fitting in amongst mortals and is very socially awkward. Not only this but she must maintain control of her powers even while in her "normal" form. If she doesn't she could cause harm to mortals which she might care for.

Baila is also a sucker for dancing in music, while indeed she frowns upon those who seek to control her via worship or manipulation she cannot help but create rain via dancing alongside "rain dancers" in certain parts of northamer.

Retrieved from "https://sonicfanon.fandom.com/wiki/Baila;_Goddess_of_Weather?oldid=1799834"
Community content is available under CC-BY-SA unless otherwise noted.