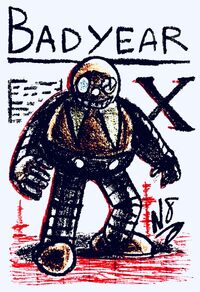 Badyear is radical and feverous, though he has enough expertise to maintain his cool when the situation calls for it. Devoted towards being a better leader than his creator, he vows to not abuse other badniks like the Eggman. He hates most organic sapiens just as much as he does the doctor and believes their only use is to be made into obsolete biofuel.

Badyear was first built as an Egg-Robo during Emperor Eggman's invasion of Angel Island that simply went about his job of assisting his creator in the repairing of the Death Egg, but Sonic stopped the launch and caused it to crash. Badyear survived the event by fixing himself and was later assigned to assassinate Knuckles.

Badyear met his end during his in Mecha Sonic's final battle with Knuckles, wherein Knuckles broke free of the Egg-Robo's restraints and dodged Mecha Sonic's spin attack, causing the cobalt machine to accidentally destroy Badyear. His memory chip, still intact, would be stored among the rest of the spare badnik parts after Eggman was defeated.

In an effort to conserve resources since his most recent defeat on Earth, Dr. Eggman took to producing his older and/or prototype models of his badniks, modifying them in any way deemed necessary. Badyear's memory chip was used during the construction of the 1994th Prototype Egg Pawn and stayed dormant for an unspecified period of time.

During this wait, Badyear dwelled on his resentment of Mecha Sonic for destroying him, and then the once-again humiliated Eggman for the way he would treat his robots and waste their lives to fight his battles for him. It was then the Egg Pawn first desired to break away from the Eggman Empire, but he decided to mask his hatred with loyalty like the rest of the other badniks.

Finally in 2030, Badyear was deployed from the Death Egg Island along with three other Egg Pawns to search the Modze-Yndelgo for the red chaos emerald aboard it and arrest the ship's crew, who turned out to be the three hedgehogs Elijah, Xiro, and Axio. After a tense exchange between Badyear and Elijah, Xiro suddenly homing-attacked the badnik and broke his left eye, instigating the battle.

Badyear would request reinforcements throughout the battle as the Mobians dismantled his entire squad, which would lead to him challenging Elijah to a sword duel. The far more experienced veteran defeated Badyear and stabbed him with his own spear, though Elijah mistakenly believed the robot to be out of commission. In actuality, Elijah damaged the hardware that would connect Badyear's eyes and control to the Death Egg Fortress, freeing him completely of Eggman's bindings. Realizing this, Badyear played dead until the end of the battle between the hedgehogs and the Egg Lamprey. After Eggman departs with the chaos emerald and the Mobian array escapes to North Carolina aboard a raft, Badyear started to construct a raft of his own.

Badyear, like most other offensive badniks, can sense chaos energy and acutely determine the presence of a nearby chaos emerald. He also possesses a degree of chaos affinity, but his body can't handle the full power of a super form. At most, this affinity grants him protection from the Master Emerald's aura and allows him to absorb power from a single emerald.

The Egg Pawn is subject to his typical weaknesses, mainly electromagnetism, electricity, and water. Chaos energy and gamma radiation can also overload or damage his hardware and software.

Retrieved from "https://sonicfanon.fandom.com/wiki/Badyear_X?oldid=1864143"
Community content is available under CC-BY-SA unless otherwise noted.