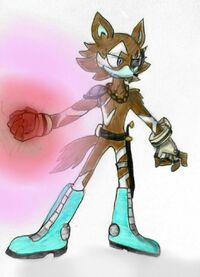 Jazz-rail: When Sonic and Azrail had been introduced and the blue hedgehog made the mistake of mispronouncing Azrail's name only moments later

Rookie: Occasionally used by the other rebels due to Azrail being a new member of the Resistance
Age
34
Gender
Male
Species
Wolf
Alignment
Neutral Good
Relationship Status
Single- Azrail was previously engaged, but his fiance perished fighting alongside many other to-be martyrs during Infinite's attack on Azrail's home town
Voiced By
Dominic Keating
Appearance
Color
Auburn
Height
4'5
Weight
112 lbs
Description
A male wolf in his late thirties. Generally keeps to himself, but can be outspoken when the time calls for it. He is generally suspicious of others and for the majority of his adventures has little trust in Sonic.
Biographical Info
Birthplace
Mobotropolis
Current Residence
Resistance Base
Relatives
???
Affiliations
The Resistance
Personal Info
Likes
Tinkering in his workshop, troubleshooting with Tails, explosions, blowing things up
Friends
Tails- Tails is the only person Azrail fully puts his trust in, and considers him to be the yang to his yin. Both of them share an interest in the design and creation of weapons and tools.
Foes
Infinite-

Infinite murdered Azrail's fiance, not to mention his entire town along with it. This and the jackal's siding with Dr. Eggman has put Infinite high on Azrail's target list.

Azrail didn't have much of a personal grudge against Eggman until the Doctor joined forces with Infinite. It was then that Eggman made himself an enemy of Azrail's.
Romantic Interests
None Currently
Occupation
Resistance Soldier
Skills and Abilities
Skills
TBA
Abilities
TBA
Powers
TBA
Weaponry
Grappling Hook, the Reaper's Cutlass, Hover Wispon
Other Info
Sexuality
Bisexual

— Azrail chewing Sonic out for his arrogance

Azrail Trineer is a male Mobian wolf, thirty-four years of age and the sole survivor of Infinite's attack on Mobotropolis. He makes his official debut in the upcoming novel Sonic Forces: World's Edge, which will be published alongside a graphic novel of the same name. He is voiced by the British actor Dominic Keating.

I've been sick over the past few days, so as a get-well gift to me (and a way to get me slightly peeved at the same time), my friend Alicia drew me a picture of the Avatar she had created when playing Sonic Forces. Ironically enough, said Avatar looked an awful lot like Lt. Malcolm Reed, my favourite character from Star Trek: Enterprise. So instead of hating the Avatar, I fell in love with the character instantly. I asked Alicia to draw me another picture, but with a few changes (and I tell you, she practically squealed when I asked.)

Meanwhile I worked on both the development of this character and one of my oneshots (for another fandom). I did some research on the Sonic Forces game, watched the cutscenes, etc. I actually liked the concept of the game, but I felt that said concept had been very poorly executed in terms of the story. It seemed too flat. No mention of what happened to Sonic during his imprisonment. And the characters overall just felt bland, to put it bluntly. So, I have taken it upon myself to try and fix all of that- starting with the creation and development of Azrail.

Azrail tends to keep to himself, often turning down the offer for company in favour of being by himself. He has been known to sometimes (yet rarely) make exceptions when it comes to Tails, who is the only person who Azrail trusts, let alone actually considers a friend. Ironically, although Sonic is Tails' best friend, Azrail has little faith in the hedgehog and is even suspicious of him for most of Sonic Forces: World's Edge.

In spite of his closed-off attitude, Azrail can be very outspoken about his opinion and becomes irritated when ignored. He also has an aggressive streak- of which Sonic had the unfortunate honour of experiencing during their first official mission together when the hedgehog criticized him for "thinking too much." Azrail has also been known to have a sarcastic (and sometimes even dark) sense of humour- his jokes often biting and sometimes cruel.

This attitude is in actuality a front. Azrail has a more sensitive side to him, which he prefers to conceal for fear of losing more people that he cares about. He has a strong attachment to Tails and is willing to do whatever it takes to protect the two-tailed fox from harm.

Azrail is a male Mobian wolf covered from head to toe in auburn fur splashed with white markings. His muzzle and the insides of his ears are both a pale shade of cyan. He stands at about 4ft 5in. His body, while lean, is moderately muscular (especially so with his upper body.) Azrail's right eye is a steely grey- but it can appear blue in some lighting. His left eye, however, is missing- a black eyepatch in its place. Small yet deep scars stick out from underneath said eyepatch. Azrail's tail is smaller than that of most wolves, and is smooth and well-groomed.

Azrail wears a small black headset equipped with a microphone- the headset itself is set on the left side of his head. He wears a steel metal chain around his neck and a dark grey shoulder-pad around his right shoulder. He also wears cream coloured fingerless gloves with red and grey trim. One of said gloves is equipped with a green touchpad that is capable of multiple functions, including the deployment of his Grappling Hook. Azrail wears a scabbard around his waist which houses his sword, the Reaper's Cutlass. Finally, he wears knee-high cyan boots with slight heels on the bottoms.

"Two of you? Two Sonics... one Mobius. Lovely. Just lovely."- Azrail upon meeting Classic Sonic for the first time

"I'm not sure if you're aware of this, but I think you might have a stalker." - Azrail pointing out the fact that Amy is following Sonic everywhere

"Just because he's your friend doesn't mean he has to be mine. We work well as allies. The concept that there should be anything more between us is..."

"I should've done something to stop them... I could have stopped them, if I really tried."

"Tails. You're just a kid. It wasn't your fault. If anything, you should never have been dragged into this war in the first place... none of us should have." - Azrail and Tails, discussing Sonic's capture

Alicia's drawing of Azrail
Add a photo to this gallery
Retrieved from "https://sonicfanon.fandom.com/wiki/Azrail_the_Wolf?oldid=1864772"
Community content is available under CC-BY-SA unless otherwise noted.