Start a Wiki
This is an article about Azmaria the Hedgehog, a character created by GalaxyWorld27 on 6/22/2013.

My friends are important to me and i had to help them to save the world no matter what. i had to keep training.

Azmaria is a female hedgehog who was born and created in a test tube by Madoka the light and became a sweet, polite, kind and friendly person and always like to go on adventures with Disco and Sonny mostly. She always being honest with her friends and rachel and never lies to them in any kind once in her life. Azmaria always there to help her friends risking her safely to stop a major threat and foes like Dr. Eggman in any kind of situation she is in. She also has healing powers and barrier skills however, she is having trouble on controlling her powers and try to concentrate to build up her powers in order of her to master it well. 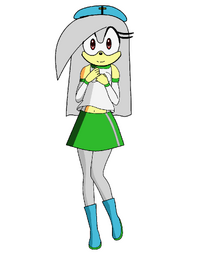 Cooking for her friends.

Writing in her diary.

Seeing friends fight each other.

Getting her feelings hurt.

Being useless to fight alongside her friends.

Thinking she can't do anything to help her friends.
Friends
Arrow the Hedgehog (love interest)

Azmaria is a hedgehog who has two bangs on her forehead and long grey hair in the back close to her legs. She has light red eyes and she wears a white shirt with off shoulder sleeves and a green skirt that has a zipper on the right. She also wears a blue beret that has a gold cross on it in the middle and blue Mary Jane boots

In her casual outfit, she wears a flower on the left side on her hair. She also wears a purple jacket outside of a green shirt with a dark blue skirt and she wears a light blue sandals with straps on top of her feet.

Depending on the adventure and circumstances, she also has worn many different outfits.

Azmaria is friendly, optimistic, caring, playful, polite, and kind girl who always has most respect of her friends. She is always honest and cares so much about her them.

She loves to cook for her friends and hang out with them. However, she is a very clumsy person and has a mind of a 11 year old.

Azmaria loves to go on adventures with Disco and Sonny by exploring the world with them. However, Azmaria is scared of ghosts, zombies, and bats, because every time she sees them she gets very scared and she is to afraid to complete her fears. She also has a crush on Arrow the Hedgehog, because she cares about him. Every time arrow gets too close to her or around her, she blushes when arrow gets too close to her.

5 favorite people that she cares mostly about are Madoka, Disco, Arrow, Bianca and Joshua and she will do anything to help her friends even if that means risking her own safety in order to help them in any situations she is in. However, She has yet to discover her true potential of what she can actually accomplish.

Azmaria was created by Madoka The Light 3 years ago. Her skills is that she is immortality and don't age according to Madoka. Madoka consider Azmaria as her daughter. However, She has a body of a 15 year old.

Azmaria in her modern outfit.

Azmaria in her dress outfit.

Azmaria in her third outfit.

Azmaria in her second dress outfit.

Azmaria in her Halloween costume.
Add a photo to this gallery

Azmaria does not like to argue with her friends, and any other people. She never gets mad at her friends because she always cares about disco, arrow, jin, and others.

While not having any superpowers as such, Azmaria developed a strange power that is the healing technique that she can used it to heal others and her friends from any injuries witch can only take 8 minutes to heal others. However, her healing powers is not mend to heal herself including broken bones.

Azmaria has another ability to created a barrier in her hands and let it surround her and her friends at all times from any normal attacks and projectiles. However, she can't hold the barrier much long.

She also learns close combat from Jin during her training and want to teach her how to fight her enemies.

Thanks to her training with Jin at the dojo, She learns two new attacks. One, she can shoot pink beams from her hands. Two, She can create two fighting gloves called Brawl Crusher. It glows pink and see through her hands and can do much damage from her foes. However, this attack won't damage hard steel. Including lifting up heavy objects.

Bianca is Azmaria's best friend and they almost share a sisterly relationship for each other. Azmaria was good to Bianca and they each never argue with each other. They hang out most of the time. However, Bianca sometimes tease Azmaria for her crush on arrow and try to get them together. Azmaria will always be on Bianca's side and she will do anything to protect her at all cost. Between the two, they share a bond between each other.

When Azmaria got ceased by wolves 2 years ago in the woods at night, she was really scared of getting hurt by wolves. Suddenly, once she runs away far enough to lose them, she sprained her ankle and was surrounded by wolves who tried to kill her. Later, Arrow came to the rescue, and took care of the wolves by hurting one of them. Arrow took care of Azmaria and see her ankle was bad. He decided to take her home and make it better again. Later on, Azmaria develops a crush on Arrow and she is too afraid to admit her love for him. She blushes every time when Arrow gets too close to her. Bianca knows about Azmaria's crush and it was brought up by her and she sometime's tease Azmaria for it. However, She hasn't confess her love for him as of yet.

Madoka is the mother of Azmaria and she treats her like a beautiful princess everyday. Madoka never argue with Azmaria and she never lies to her. However, She considers Azmaria as her daughter. Azmaria is always defended by Madoka for certain crisis by Shiny bullying her and mess with her. Madoka don't like him being lazy around her house all the time.

Azmaria has a good friendship with Disco, and she really cares about him deeply. She goes on adventures with Disco and Sonny most of the time. Azmaria was killed by Veronica the hedgehog who was a assassin and later she was resurrected by Disco when he gather seven astro emeralds to bring her back to life and she hugs him for it.

Azmaria has a good friendship with Sonny. However, she also cares about him deeply like Disco.

After Azmaria met Joshua, He treats Azmaria very well and they get along very well due to there great friendship with each other. Joshua realize that Azmaria is like a sister to him after he saves her a few times from certain death by Dr.Eggman and others. Azmaria don't argue with Joshua and he promise that he will protect her no matter what happens.

Chloe has a great friendship with Azmaria and her friend Rachel the Chao. However, she doesn't like when Azmaria gets her feelings hurt when anyone don't like her cooking and insults her badly.

After they start hanging out together, they are bestest friends and have a close friendship together.

Azmaria has a good friendship with Cresselia and they both seems to be on good terms with each other.

Ice Crystal is a friend of Azmaria and both of them can hang out with each at the mall along with Bianca. Both of them seems to on good term. However, Ice Crystal threaten to freeze anyone sometimes who tries to bully Azmaria and Bianca.

Azmaria met GothAnne in the woods and they both to seem to be getting along well. However, due to her being a vampire, she was planning to turn Azmaria in to a vampire but later on, she decided not to because she realize Azmaria has a true heart of friendship.

Despite her being afraid of zombies, bats and ghost witch can terrified her, Azmaria has yet to face her fears.

"I don't know what should i do to help my friends. i'm useless."
—When she can't do anything to help her friends.

"U-um Arrow. I...i...sorry..i...have to go."
—She blushes when Arrow gets to close to her.
"Cooking for my friends is really fun."
—She always cooks for her friends.
"I guess no one wants to play with me."
—When she is sad that no one can't play with her.
"What is this place. it feels like where in a huge room."
—When her, Rachel and there friends in a mysterious location.
"I love you Madoka. I don't care what anyone says. Alien or not. Your still be my mother."
—When she hugs her and find out that Madoka is a alien.
"You guys want to grab something to eat together?."
—When she ask her friends gets something to eat at the beach.
"Sure. i love adventures Disco."
—When she is ready to go on a next adventure.
"Hey stop. That tickles"
—When Azmaria getting her feet tickled.
"Um Bianca, uh i'm not sure if i'll be able to u-um ask him out."
—When Azmaria blushes and tell Bianca she is not sure if she wants to go out with Arrow.
"Hold on Joshua, let me heal you."
—She used her healing powers to heal Joshua.
"I'll try to keep the emerald safe and sound from Eggman."
—She is telling her friends that she will try to keep the Astro emerald safe from Eggman.
"AHH!! Joshua help me."
—When she got capture by a plant monster.

Start a Discussion Discussions about Azmaria the Hedgehog