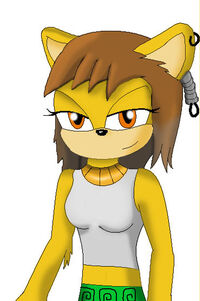 Ayah the Lioness is the mother of Cyo the Lion and wife of Umeme the Lion. She first appears in Brainwashed Cyo storyline.

Ayah is a middle aged mobian lioness wearing a white tank top and a masaai type of dress skirt in orange and green color. On her left ear is two earrings.

It is noticed that she shares same fur and eye color as her son Cyo, albeit her hair is graying due to her age.

Ayah is very caring, nice and understanding to both friends and family.

But when she found out that Eggman had brainwashed her son she became very worried as a result, at the same time she was angry that Eggman would do such thing. And after Cyo was freed from the virus, she along with her husband were at their son's side to help him out of his depression.

Due to her being close to her family, she often calls her son her 'kitty boy'.

She got great skills in hunting with or without weapons such as spear and she can outrun a zebra. When fighting, she rely most on using her claws or hunting spear. Aside from that she can roar loudly like all lions.

Ayah does not have powers on her own.

Since Ayah has no powers on her own, she rely most on using her natural abilities and is not invulnerable against many weaponry.

Retrieved from "https://sonicfanon.fandom.com/wiki/Ayah_the_Lioness?oldid=1853881"
Community content is available under CC-BY-SA unless otherwise noted.