This is an article about Axel Revante, a character created by RevanteTH on 01/24/2015.
Axel Revante 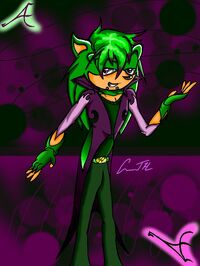 Axel is smart, and at times can be sarcastic to a fault, due to his high Intelligence, and genius Level Mentality, He suffers from a Over Compulsive Personality Disorder involving The need for everything around him to be Perfect Symmetrical and a lesser known split personality disorder, the other persona a manifestation of all his bottled hate, and dark aspect of himself which sometimes blends to well to his normal self, although, He is not entirely bad, he helps those who need it, and makes those suffer when need be, he enjoys pranks and people would often suffer at the hands of his wicked pranks.

Born to, Rath and Sapphire Revante, Axel grew up to a estate of wealth living out of the family castle in the state of Revantia, Pencilvania, with his twin brother, Noirel, and younger sister Elaine. His parents around the time of his early age of 16, on the Thirteenth Friday, of the month of October, the reversed day of his birth, His Brother, having stumbled and been absorbed into evil magic, laid waste to his family, killing both their parents, right before His and their young sister's eyes, the resulting overwhelming shock caused Axel's Powers over Darkness to shine out and cause the accidental murder of his sister next to him, further angering and causing him to grief for the loss of his family, vowing that one day, his 'Brother', the now twisted creature known as 'Noirel the Void' would pay, and he will kill him, no matter the cost.

Axel, like all of The Revante Family, has power and control over Darkness, and Shadows, being able to manipulate the shadows in order to make them corporeal and grab things, or weild them around himself to Shadow Jump through them at will over any distance, using the shadows he also has developed a Shadow Hearing power, which he can use to ease drop on almost anyone who speaks while standing in or near a natural shadow, or a shadow he created, within a three mile radius in a circle around him. His powers are still growing as he matures.

Axel, was born with the ability to see completely in the dark, as well as one would in daylight, but this has left him with the light sensitivity as one would have in being unable to see well in the dark, so he often wears hoods, or sunglasses to protect his eyes. Axel was also born with a Genius level mind and high-reflexes, giving him a strong gift over scientific feats as well as being able to move well enough to avoid deadly blows from gun or hand combat.

Axel has studied and has achieved near Mastery over the Mystic Dark Arts, obtaining the skills of a Master-Class Spell-caster.

Axel also beyond this, with his unique reflexes Mastered swordplay, and is a fierce Rapier User, sometimes using a custom blade of his own design or blades made entirely of his manifested shadow, which he could use to skillfully make up to four blades, in his signature Shadow Dance-Blade style.

Axel has few weaknesses, but the few he has include his own Symmetry disorder, which causes to a lesser degree a inability to fight or harm things that are perfect in that sense, or will grow discomforted by the fact of a lack of it in himself, disliking when it is pointed out by his scar over his eye.

The other is his light sensitivity if exposed to it enough he very rarely could go blind for short amounts of time. And in extreme cases, if exposed to direct sun light on bare skin, for long periods, could begin to burn.

Retrieved from "https://sonicfanon.fandom.com/wiki/Axel_Revante?oldid=1815647"
Community content is available under CC-BY-SA unless otherwise noted.