"From the wisp that Channels my body,im able to Harness Any form I want to! My friends are my compass,My Wisp organs Navigate......I Am AVERY THE HEDGEWISP!!!"

-Avery announces in his first appearance with Eggman

Around people,Avery is the number one person you can be with without getting hurt,scared,or embarrassed.Usually, His friends treat him like a being with no mistakes ,like he has the best personality if he didn't had a feeling of happiness or sadness (but he does). While that gives him all the respect And love he needs,He always treats himself like trash,like he could be something better or nicer if he tried. Back on others,His main Rivals or enemies Scowl at his success he is going through, even though occasionally, he tries to help them get out of the mess they're in, even though he knows that they will decline.

Avery is a average looking hedgeWisp with his muzzle ,nose,ears and eyes,other than that,his hair and spines have colored tips given to him to show his wisp powers,whenever he transforms,his tips changes color.but other than that, he is a navy blue furred hedgehog with a tan muzzle,inner ears,and palms.

Avery would usually wear a Light green jacket,dark blue pants and his own futuristic design of shoes that he created. At parties or other stuff fun like parks,he wears his Kaepernick jersey ,some Nike shorts, a regular hat and some regular red Ralph Lauren's.

He was born and grew up in a normal family in an average town, he lived happily until he was about 11 years old, but at that point life took a turn for the worst.

He lost all of his family, they were split up after an act of terrorism and was now alone and forgotten. Reunited with a friend he had to survive in a bitter world. But with his courage and diligence, he managed to conquer all fears and doubts and escape what möbius calls hell. This has turned him into the man he is today.He always strives to be the best in the stuff he does and it always comes out in the best results.finishing college with great friends,great opportunities,and great powers to be unlocked.then comes his first villain:Doctor Ivo Robotnik aka the EGGMAN. he found Avery buying Some stuff at the supermarket for a party. He told Avery that he was the one who sent terrorist to eliminate his family members . Being so tempted to Destroy Eggman now, Avery asked about the terrorist,leading Eggman to say that they were his robots that sonic destroyed.but their souls lived on and came back to lead the start of eggman land. Then that's when it happened-Avery was crazed to stop Eggman at any cost.and his linking power turned on and drilled Eggman to the ground, where Eggman tooked off surrendering. Being slightly late for the party,everyone wondered about where he was. They still had a party and in the morning, they slept at his place ,but Avery wasn't there...

warm welcome to the Eggman fleet

Avery woke up in a tube container with strings of tubes were place onto his body,making him weak. And that is where he saw the first soul badniks. The badnik picked up the tube and sent it to the lab,were doctor Eggman and his enemy/friend black doom. Resting a little bit, he heard that they were going to turn earth into the black comet and it's Moon, Eggman land.they brought Avery's friends there to forced to watch Avery's soon to be death.and that's when it happened-black doom sent a spear through his chest,piercing it to chest to heart,to back.With the new power his wisp part adopted, he healed himself and absorbed it. Having the power of a chaotic spear,he absorbed it and the power turned him super! He broke the tube and destroyed the tubes with half the ship along with it.the fleet members including Eggman and doom escaped the burning ship.as for Bobo,Charles,Emma ,Lauren, manikku, and rouge They were rescued by Avery who was exhausted.

Weirdly, after apologizing for all the craziness, they were completely fine,not angry,disappointed, scared or anything else...

Finding darkness all around

Unsure where he was going, Avery met blake after trying to escape Eggman's plans. After long amounts of attacks,they decided that they should team up. They soon encountered black doom, who only attacked Avery with lies of his past. With all these dark things controlling him, he turned to his dark stage. Nearly killing Blake with this power, Avery decided to go further.

By harnessing different variants of Hyper-go-on from Wisps, Avery can use specific Color Powers to transform into a certain form, such as a drill, a laser or even a planet, each one possessing its own unique abilities. So far, Avery has been able to transform into the Cyan Laser, Yellow Drill and Indigo Asteroid. However, these transformations require a Fast reload supply of Hyper-go-on to be maintained.

In combat, Avery is a lethal and extremely powerful force that very few can defeat. He never holds back on his immense strength, making him a brutal fighter with a distinct killer instinct. Avery's skills are more than a match for even the strongest in the series, and has been able to take down some of the most fearsome foes of the series on his own, such as Avery ying yang. To best put his skills in perspective, as seen in some of the scenarios in the beginning of möbius' end, Avery is the only person so far who has been able to utterly defeat the anti wisp in combat, even when it had the Emeralds for support.

Avery can access an enhanced state dubbed the Chaos Boost. In this state, his powers are boosted significantly, granting him warp-like speeds, near invulnerability and bolstered Chaos Powers. He uses the transformation when going againtst silver(with his super form enabled) and had an unexpected win.

While not having any physical weakness, Avery was initially a somewhat easy target for manipulation during the time he had blackout due to his confusion about what he was supposed to be. Dr. Eggman could fool him with his lies about his past, and Black Doom could subtlety manipulate him using visions of his own dark past. However, after learning of his true purpose, Avery the hedgehog(slash wisp) is now not as easily deceived as he was before. 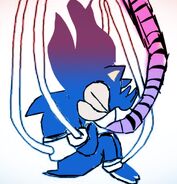 IMG 0891.JPG
Super Avery .JPG
super Avery! I can't believe I pulled it off today
LaurAvery.JPG
Finally found a name for her-Lauren.anyways this is Avery and Lauren

IMG 1956.JPG
Ending of a fight against Blake
Community content is available under CC-BY-SA unless otherwise noted.
Advertisement