The author of Austin Harsiesis the Lynx considers this page to be unfinished. As such, some sections may change. 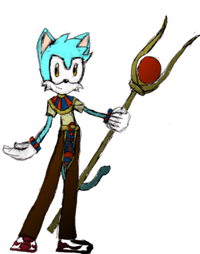 Austin Harsiesis is a Mobian Lynx who travels the world with his staff Covenant, helping those in need. He is also a character in the upcoming game currently codenamed Disaster Club Act 0.

Austin is a short, cyan lynx with rich, fluffy fur and golden eyes. He wears a mix between modern clothing and the traditional Egyptian-style garb of his homeland. As such, he has black and white trainers And brown tracksuit bottoms along with an ornate T-shirt with several egyptian features, as well as two blue and red bangles. His staff, Covenant, is a long gold staff with the gold pole eventualy splitting into two horns. In the middle of these horns is a red disk, which is what usually generates the staff's power.

Austin is an easygoing dreamer, reletively laid back in situations that don't immediately require his attention. He is very level-headed and calm in these situations, due to both his training and lackadaisical nature. He has high level of patience and friendly disposition had gained him many friends and respect from those he met in his travels. However, Austin is also quite naive and is easy to be manipulated, especially when others are at risk.

Despite his laid back personality, Austin is a restless spirit, never stopping on his travels around the world and getting bored of most places quite quickly if there isn't something happening there or a good friend there he wants to talk too. When he does get bored of them, he leaves almost as quickly as he came. However, he thinks he may be able to find rest in some place somewhere once his travels are complete.

Austin was born in a rural village in the south of Shamar to a Shamari father and Eurish mother, hence his more western name. The village was built near a large cliff said to be where the old kings of Shamar were buried in lavish tombs with amazing treasures. However, no archaeologist had succesfully proven this theory. Nonetheless, the children of the village, Austin included, regularly played near the cliffs, pretending that mummys and golems made of treasure regularly came to attack them as they explored the underground complexes to find treasure. While they were playing, the person playing a mummy forced the treasure hunters, one of which was Austin, back against the wall of the cliffs. This resulted in Austin touching the cliffs and the wall suddenly opened up, revealing a long corridor with a mysterious light at the end of it. Although most of the kids refused to go in, Austin and some of the braver kids walked in.

When they got to the end of the corridor, Austin and co discovered a gold staff standing in the centre of a small room. Austin was strangely drawn to the staff, but when he grabbed it he found he couldn't let go and the corridor started to collapse. The kids escape, but Austin was chained to the staff, unable to escape. However, the staff protected him with a barrier of light. Speaking to him telepathically, the staff explained that Austin's destiny was outside of the village, as was the staff, which refered to itself in the third person and called itself Covenant. Covenanr wanted Austin to explore the world, and Austin gladly excepted. The staff then teleported Austin back to the village, a power Austin has never been able to use again, and once he was a teenager and able to travel on his own Austin left his village, never looking back.

Austin has almost no powers himself and isn't an especially good fighter hand-to-hand. However, along his travels he learned how to weild a bo staff while in Chun-Nan. Although he lacks a bo staff himself, Austin weilds his staff in much the same way when in close combat. Austin also has the power to make Covenant disappear and then reappear in his hand at will.

Austin's main advantage in combat comes from Covenant. The staff allows him to manipulate light and energy, focusing it into lethal rays or orbs of energy. Austin has found many ways to make more imaginative use of this in combat, mostly using mirrors or window to relfect the light rays. He also thinks Covenant is much more powerful then what his current powers let on, although he is still practicing with the staff.

Retrieved from "https://sonicfanon.fandom.com/wiki/Austin_Harsiesis_the_Lynx?oldid=1871120"
Community content is available under CC-BY-SA unless otherwise noted.