"Crocodile! I'm an Alligator not a Crocodile, there is a big difference you know!"

This is an article about Aureus The Alligator, a character created by Clastus The AshLynx on 11/25/2014.
Aureus the Alligator 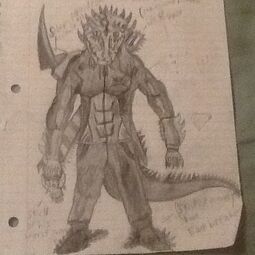 At a first glance, one might mistake aureus for a muscle bound idiotic Crocodile with his brackish brown skin tone and swamp green scales. Along with his considerable bulk and a face with so many teeth jutting out of his mouth that would make even the bravest or foolish of Mobians hesitate in fear when confronting him. This however is far from the truth, while Aureus may be strong he is not dumb and what he lacks in finesse he more than makes up for in strength and intelligence. However speed is a moot factor when confronting Aureus in the waters where he feels most comfortable fighting in due to the fact that he is an excellent swimmer and the fact that creatures who have adapted well on land are usually out of their environment when in the water. Oh and facing down an angry American Alligator doesn't help much either.

Aureus is calm and very analytical, which is very unusual due to the fact that most people would expect him to be very tempermental or foolhardy thanks to his sheer bulk and size. Instead he prefers to enjoy the little things in life and observe the scenery of his swampy home; surprisingly enough he likes kids and isn't above helping a little kid find something they dropped or helping them find their parents, but if he sees that a kid is in danger or is being abused, not disciplined because abuse and discipline are two different things, he will go into an animalistic rage. Ripping and tearing the one who endangered the child into bloody chunks; sometimes he would eat the perpetrator while still alive. He loves his Chain sword, which he affectionately named "Ole Ripper" for the effect it has on flesh when its running like a chainsaw. He's also willing to kill people for money, yet the people he kills are usually criminals who have committed unspeakable atrocities and human traffickers.

Aureus was born in the swamplands to two unknown mobians who later died when he was five. After his parents died he was sent to live with his grandfather who was a kindly old man named Aurum "Ripper" Alexander who loved Aureus like he was his own son, his grandfather taught Aureus many things like how to hunt and survive, swordplay and how to build his own weapon. Which Aureus did within the process of five years. Though sadly Aureus suffered tragedy at the age of ten as his grandfather died protecting his ancestral home from bandits, just a day before Aureus finished building his chain sword. It was when Aureus finally finished his weapon and went back to his grandfathers did he see what had happened and the culprits. Aureus went over to hug his grandfather where he proceeded to speak his last words " Aureus, I am not long for this world so listen to this dying old mans final words would you? I have always loved you as a son Aureus and I want you to know that no matter what path you take, as long as you listen to your heart. I will always be there and I will always be proud of you." Spoke Aureus's grandfather for the last time as Aureus grieved for days, even as he found the ones responsible and he killed them brutally with his chain sword that he had christened as " Ole Ripper" he grieved for his grandfather and took his final words to heart. Eventually he had to move on from his loss and he did. But every year he will always return to his grandfathers house to visit his grave underneath an old Oak tree in order to place flowers by his grave and talk to his grave.

Hydrokinesis: Aureus can manipulate water to an astounding degree that most thought to be impossible. Not only can Aureus make various objects out of water as well as attack or defend with water. He can also manipulate the molecules in the air to form water, though this skill takes considerable concentration and stamina. Thus Aureus prefers not to use it if there is a nearby source of water he can use.

Regeneration: Aureus has been gifted with the ability to regenerate almost any body part, with his head being the only exception. Small wounds heal up in seconds, moderate to severe wounds heal up in minutes to hours depending on how serious the wound is. Critical wounds usually take about twelve hours before the wound is healed completely. He can also fix broken bones this way as well.

Super Strength: Aureus, due to a mix between his Alligator Ancestry and his impressive physique, is able to lift things up to an excess of sixty-five tons, although lifting that much weight would put a serious strain on Aureus's body and leave him bed ridden for about a week if he wasn't fighting anyone and he was fully rested. Therefore he prefers not to lift things above thirty-two and a half tons.

Being an Alligator Aureus is able to do things that most non reptilian mobians wouldn't be able to.

Enhanced bite force: Being an Alligator comes with the sweet benefit of having one of the strongest bite forces of any mobian or non mobian creature. His Super strength further increases the amount of strength he can put behind his bite.

Expert Swimmer: Aureus has been swimming in the bayous and swamplands for about as long as he has been alive. Therefore he would be an expert swimmer capable of holding his breath for up to two hours and his maneuverability and mobility far surpasses his movement range if he were on land. Add in his hydrokinesis and he is nigh unstoppable underwater.

Camouflage: Aureus is capable of blending in with his swampy environment due to a mix of his coloration and his survival training he underwent with his grandfather. Take him out of the swamp and he is a lot more noticeable, although he is still able to remain inconspicuous it's not the same as if he were trying to hide and ambush his quarry in the swamplands.

Survival Training: His grandfather had him go through intensive survival training in order to one day survive if he were stuck in the wilderness without any form of help or indication as to where exactly he is.

Swordsmanship: His grandfather has taught him the ways of the sword and how it is not honorable to strike down one who is defenseless or the innocent. He takes that lesson to heart as he practices his swordsmanship with his unorthodox chain sword.

blacksmithing: Aureus has had to craft his own weapon, which was the chain sword he named "Ole Ripper" and instead of just buying a new weapon whenever his sword broke down, he would just repair it and upgrade it, and "Ole Ripper" has always been Aureus's most reliable weapon. Plus he would never throw away his sword due to it being the last thing he has of his grandfather other than his teachings and his code of honor.

Clumsiness: Aureus cannot move as well as he could in the water, his size making him clumsy and ungraceful when swinging his fists in hand to hand combat as well as various other things that involves movement on land.

Cold: Aureus, being a reptile is extremely susceptible to the cold weather and Cryomancers thanks to him being cold blooded.

Lack of range: Aureus prefers to deal with his quarry up close due to the fact that he couldn't shoot a fun and hit someone with a bullet to save his life, that disadvantage of his is offset by his Hydrokinesis and the fact that 50MG rounds will only succeed in getting his attention. Something which isn't a good thing if the one who shot him is his target or preventing him from completing his mission objective.

Retrieved from "https://sonicfanon.fandom.com/wiki/Aureus_The_Alligator?oldid=1867030"
Community content is available under CC-BY-SA unless otherwise noted.