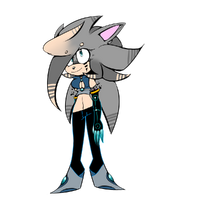 Astra The Unerinadae, full name Astra Ufolaurasiatheria, is an unerinadae and a protagonist of the Team Radical universe. Arguably one of the most hyperactive characters you'll ever meet, she is still a loyal companion and cares about her friends, even if she considers them to be rivals. Living on Proxima Centauri b, Astra spends most of her time at a coffee shop. She is also inspired by Starfire from DC Comics and Blaze The Cat from Archie Comics.

Astra is usually very hyperactive from all of the coffee that she is addicted to, making her happy and curious about everything. Like Tesla, Astra tends to be tauntful at times, but mostly she is very chill and wants to know more about Earth. In battles, she commonly encourages her enemies to be stronger but at the same time, doesn't recommend to since she believes it will be "easier for them to fall back".

Even though English is a primary language on Proxima Centauri b, it has a different dialect. Due to this reason, Astra has notable grammatical differences compared to people speaking Gaian English. For example, instead of saying "I just woke up", she says "I just did the waking up." When visiting Earth, people consider Astra to be socially awkward, but she finds this to be more of a strength than an insult or concern.

Thanks to her genetics, Astra is now immune to heat. In fact, she is strengthened by it. With this, her powers are much more powerful during the day, or during hotter temperatures.

While this isn't exactly a special ability for humans, Astra becomes extremely powerful when drinking only a sip of coffee. Unerinadaes have organs that operate at a quicker capacity than normal Gaians ; they digest food quicker and thus, caffeine takes a more intense effect on Astra. This becomes her strength, but also her weakness as she is obssessed with the effects of it.

Unearthlings are faster than Gaians, thanks to their leg bones being elastic. As one, Astra is able to run faster than 80 miles per hour.

Astra is able to propel herself in the air for a brief period of time when using plasma.

While she gains power the hotter it gets, Astra's powers also weaken the colder it gets. This is because plasma can only exist in warm to hot temperatures and without that, plasma can't burn and therefore, it's useless.

While this may also be a strength, Astra's hyper personality would often get herself into trouble and leap into action at very innapropriate times, sort of like Silver's naive nature.

"Hi, I'm Astra, and I love you!" - Astra when meeting somebody new on Earth.

"What is Earth? Does he have a coffee?" - Astra, hearing of Earth for the first time.

Retrieved from "https://sonicfanon.fandom.com/wiki/Astra_The_Unerinadae?oldid=1826432"
Community content is available under CC-BY-SA unless otherwise noted.