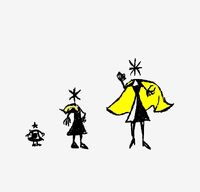 Asterix is a pitch-black, cloudy humanoid with an asterisk for a head. Asterix's limbs and fingers are thin, and her base attire varies among her three stages;

Stage 1: A small childlike creature with a bell-shaped dress and a thin white scarf around her seemingly invisible "neck". Her limbs are literally lines and she has three fingers for each hand, and she wears cartoony bean shoes. Her head is a five-pointed asterisk.

Stage 2: Much taller than stage one, and her figure is slightly more defined. She has four fingers and wears a short pale yellow cape with heels. Her head in this form has six points, and she resembles a typical teenager.

Stage 3: As the tallest and defined of them all, she's around 70 feet tall and wears exaggerated high heels. Her head has eight points, and her cape is larger and bright yellow. She also has five fingers in this form.

She is very loud and hammy, and always quick to take the extreme route whenever plan A fails. She can be very intimidating at times, since she has an unusually deep voice. Emotions like love confuse her, and she is also a terrible diplomat. She has been described as "primal" by Pence-Larg (secretly) and by her enemies, most often by those who fear her.

Long ago, Pence-Larg, a defector of the Archons (energy vampires that crave on low-frequencies from physical beings) used his personal reservoirs of energy and dark matter to create a new subspecies called the Obscure; among the creatures he created was Asterix. Since Pence-Larg needed someone to rule for him when he's busy, he unanimously promoted Asterix to be the queen, and she was assigned to find Raymond and conquer his thoughts, for he had the secret ability to make his dreams reality. Capturing his mind would allow the Obscure to achieve a much stronger, physical form, and immunity to the Negative Space. She was first deployed on Earth as a spy, but since she was in her first stage, she was disguised as an elementary student named Estella, with Msizi (blekfoos in his cat form) assigned to protect her. After the Mini-Militia's raid on Dr. Eggman's base, catfoos disguised as a swatbot and stole the emerald there. He used it then on Estella to transform her into her second stage.

She is good at making strategies, fighting, and maintaining/establishing dominance over others.

Whenever she uses dark attacks, it drains from her mass and until it devolves her into her weaker forms. 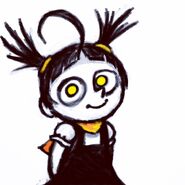 Add a photo to this gallery
Retrieved from "https://sonicfanon.fandom.com/wiki/Asterix?oldid=1826189"
Community content is available under CC-BY-SA unless otherwise noted.