This is an article about Aspen Kay, a character created by Tyflo 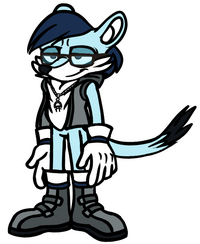 Aspen is a 19 year old stoat, he's snarky and arrogant and always has a comback, despite being lazy he has a knack and love for tech, especially computers and hacking, he has the power to cool things down that he is touching, though he is poor at using it.

Aspen is an Ice Blue and White stoat, standing slightly taller than the average mobian and weighing slightly below the average. He has a slender frame, lacking much discernable muscle and is also quite lanky in proportions, his legs are longer than his torso. He has dark blue hair that he styles loosely and somewhat messily. He dresses simply, wearing a grey unzipped hoodie, and necklace and simple gloves and shoes.

Aspen is sassy and apathetic, in conversation he's very casual, he speaks his mind. He's incredibly snarky and sarcastic, almost comically so, he seems to enjoy getting a reaction out of people, though he tries his best to make it clear to people that he's joking when he is. Despite appearing disinterested in most things, Aspen is very interested in computers and is very willing to talk about them, tech is one of the few things that can draw enthusiasm out of him.

Aspen's an apathetic person when it comes to things he's not interested in, he's quite unwilling to exit his comfort zone and while he may enjoy trying new things every now and then, he tries to lead a much more toned down and calm lifestyle than most.

He's also very jaded about hero and villain semantics, Aspen makes his feelings very clear on 'heros', he feels like it's an unfair representation of people to paint the world in black or white, he belives that there's evil in every person, but there's good in every person too, though he'll often joke about how feels like he's the only exception to this rule. He holds a lot of distain for so-called heroes, finding their over-saturated, sugary optimism to be sickening, he hates that many of them deal with publicity over action, who cares if a hero sells toys or whatever, as long as they got a job done, atleast that's how he thinks about it? Though, he thinks the same of the opposite, he doesn't like anti-hero mavericks who solve the problem, but not without blowing up a few cities, he feels people like that cause more problems than they solve, and can't be bothered to deal with them usually.

Aspen's pretty smart, academically and logically, however he rarely puts effort into things and isn't very good at planning or organising, he's often late for things. He's also very pragmatic, as a realist he understands more by example than theory, and values practical outcomes rather than theoretical risks, though he usually does weigh the risks against the potential positives in his though procedure.

He's also a very big coward, he gets frightened easily, but also uses cowardly methods to get what he wants, he can be manipulative and decieving and even treacherous, but he's loyal to a fault once he properly trusts a person, even if he disagrees with their ideals or methods. He's completely willing to seize an opportunity, even if it's at the expense of another, or allow someone else to take blame for something even if he was at fault, he's also a bit egotistical, despite his self-depricating style of humour, he does things for himself rather than others, if he were to save the world, he wouldn't do it to he'd save millions of people, but just so he wouldn't die, if he sees a reasonable way out of a life of death situation, that requires him to betray someone in order to survive, he'd do it, though he'd probably struggle with it if that person would end up seriously hurt.

He's quite a judgemental person, sticking to his first impressions of someone until he's proven wrong, though he's fine to change his opinions on people, he's usually not a bit fan of being proven wrong.

He's hard to manipulate and decieve but is incredibly easy to intimidate, if he has a secret and is being interrogated for it, he'd happy release the secret just so he wouldn't get hurt.

Aspen's upbringing was pretty much entirely normal, he grew up an only child and had reasonably wealthy parents which lead to him being quite spoiled, he was given most things he asked for and rarely did any work for what he got, this lead to him being rather apathetic in school, he did very well for himself, getting mostly As and Bs though he could of gotten higher grades if he put effort in, his lack of effort and bad attitude lead to him rubbing both his peers and teachers the wrong way, he had a few friends but got picked on a bit by some of the stronger kids because he was sort of a prick, though once he learnt how to hack and code these people ended up being too scared to bully him, afterall why bully a guy who can get all your info and leak it? After passing high school with good grades he started going to University, studying Cryptography, though after finishing his first year with good grades he decided to take a gap year in order to take a break, the rest is really bland history and this is a bad backstory.

Aspen's powers are pretty weak, they're uses are niche at most and they're usually mostly useless, though they can be quite strong if he gets creative with them.

His power is being able to freeze or cool down objects he's making contact with, so if he's holding a glass of water, he can make the water freeze, and eventually the glass will freeze. He can also coat things he's touching in ice, so if he touches a person's arm, he can coat the arm in ice, this can be used defensively or for utility, but has little presence in general.

Aspen is a genius with tech, especially computers. He's a master of hacking, encryption and general computer-y things, though he specializes in hacking into networks or specific computers and gather or planting files there, without the person hosting the network or using the computer even knowing he was there.

Aspen is also quite nimble and flexible, mostly due to his light weight and slender frame, he's able to move quickly and quietly without people noticing him, which is useful for stealth and infiltation, though he runs out of breath very fast.

Despite excelling at stealth, Aspen is almost completely useless in combat, he's nervous and unrefined, due to lack of practice, he's not very strong and is pretty fraile as well, he doesn't fight very often, simply because he has no reason to for the most part.

Physically, Aspen is riddled with weaknesses, he's a terrible fighter in general, getting nervous and frightened, losing focus and giving up easily.

Aspen's stamina is pretty bad, he doesn't last long in a fight, he gives up incredibly easily and generally, one or two punches will knock him out, he prefers to not get into fights to begin with, or taking out his opponent before they can hit him back.

Aspen also doesn't have good eyesight, he also has a habit of being a bit reckless in desperate situations, and is willing to risk himself in order to stop a fight, usually by jumping at someone's legs and trying to freeze them to the ground.

Mentally, Aspen is more sound, he's smart, pragmatic and is pretty well adjusted socially, he doesn't bottle up his feelings, but doesn't vent randomly either, however Aspen's not perfect here either, he's got a very sharp tongue that tends to get him into trouble, he throws insults around all the time without thought of how the person would react, this tends to either annoy or upset people. He's not a hothead, but when he gets mad he's very hard to calm down and he tends to keep grudges.

His necklace is actually an XNOR (NXOR) gate, which is a type of logic gate.

Retrieved from "https://sonicfanon.fandom.com/wiki/Aspen_Kay?oldid=1867843"
Community content is available under CC-BY-SA unless otherwise noted.